September 16, 2013 (San Diego) – San Diego’s City Council will hold a hearing today at 2 p.m. on the controversial Castlerock housing project.  The project is proposed by Pardee Homes near the boundary between Santee and San Diego.   The Planning Commission previously recommended annexing land for the project to Santee. Council has the option to approve, modify or disapprove the project and if approved, to determine whether or not it should be transferred to Santee’s jurisdiction.

Campaign contribution forms reveal that Council President Sherri Lightner accepted $4300 in donations from 12  Pardee Homes employees during her primary challenge. “If Pardee reimbursed its employees, the contributions would be illegal. Regardless of the contributions legality, we believe Pardree’s contributions are an inappropriate attempt to purchase your vote for a quadruple up-zone on Castlerock,”  wrote Van Collingsworth, executive director of Preserve Wild Santee, in a letter to Lightner. 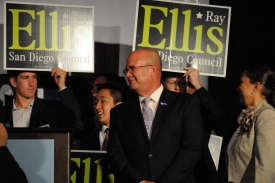