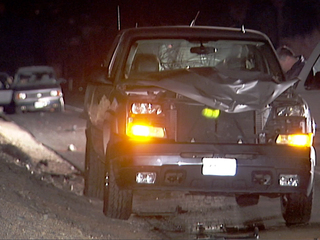 January 19, 2013 (Alpine) – Jeremiah Smith, 38, of Alpine has been arrested for suspected drunk driving after striking and killing a man beside I-8 in Lakeside. He is the owner of Gym Trix  and Rocket Cheerleading in Alpine, ECM has learned.

The victim, a Mexicali resident, was driving a Chevy Astro minivan towing a Toyota west of Lake Jennings Park Road with his wife following in a Toyota at 4:10 a.m.  One of the vehicles had mechanical trouble. Both pulled over and the man exited his vehicle.  He was standing by his wife’s car when the GMC 2500 driven by Smith struck the Toyota, pushing it into the victim.