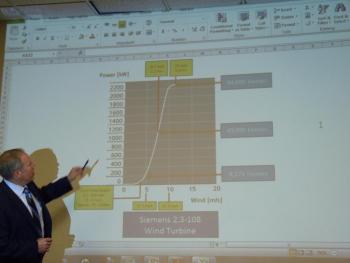 May 7, 2014 (San Diego)--“How do you beat the national average with below average wind speeds?” Attorney Bill Pate posed that intriguing question at a forum hosted in San Diego recently by Activist San Diego.

Good question. Pattern Energy told the California Public Utilities Commission that it would reach 34% capacity at Ocotillo Express Wind Facility, a  site rated just a class 2, the second lowest federal rating for wind speeds.  The first three months of data for the Ocotillo project show only about a 19% capacity reached.   In the entire U.S., there is only a 22 to 23% net capacity on average.

So how did the project get approved?

January 23, 2013 (Ocotillo) -- Videos shot by award winning photojournalist and engineer Jim Pelley suggest that the Ocotillo Wind Express Facility is thus far not living up to projects made by Pattern Energy, which claimed in early December that "with wind forecasts looking favorable" it expected to power 125,000 homes, News 8 reported.

It takes sustained winds of 8 to 10 mph before wind turbines are productive.  Thus far there is little evidence of any such sustained wind speeds in Ocotillo during the first seven weeks of the wind facility's operations--not even on a day when high winds were forcecast for the region.  View videos below.  Such underperformance is not unusual, an ECM investigation has found.  Watch for more details soon.