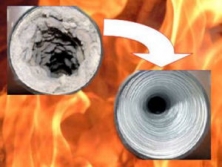 February 20, 2013 (San Diego’s East County)--Who would think that the danger exists in doing such a daily household chore such as laundry? Recent incidents across the country point to the dangers of dryer fires. In fact, on average, over 13,000 fires start in our laundry rooms in the United States each year, resulting in deaths and close to $10 million in property damage says Fire Chief Sam DiGiovanna. Nearly 4,000 of these fires arise from lint buildup and overheated motors that occur when people fail to clean their dryer vents. The following advice can help you prevent a disaster.