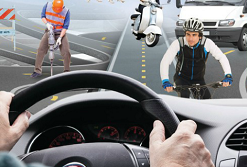 September 4, 2015 (San Diego’s East County) - The National Safety Council has announced some startling data about America’s roads.  They released a report on Monday estimating that traffic deaths for the first six months of 2015 were up 14% over the same period during the previous year, with serious injuries up 30%.  Approximately 19,000 deaths have occurred on US roads from January through June of this year. June 12, 2013 (San Diego) – Every day Fire and EMS personnel respond to workplace accidents resulting in injury and even death.  It’s estimated that nearly 4 million employees suffer from a workplace injury and employers spend more than $170 billion on associated costs each year.  Many of these accidents could be avoided if an education and prevention program were in place says Fire Chief Sam DiGiovanna.