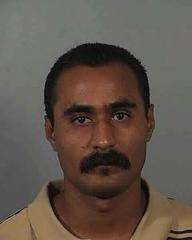 June 29, 2013 (San Diego)—The San Diego Sheriff's Department, Crime Stoppers and the Fugitive Task Force seek public help to locate Ramiro Espinoza, who  has a $1,000,000 arrest warrant for attempted murder, domestic violence, felony assault, as well as a felon in possession of a weapon. Espinoza has a tattoo that says "San Diego" on his stomach. He also has a tattoo picture of Jesus with a thorn crown on his back. Espinoza is known to frequent the South Bay area of the county.

If you see him, do not approach him. Espinoza has a history of violence and should be considered armed and dangerous.