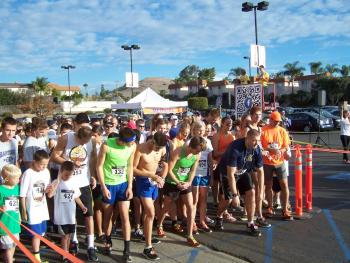 November 28, 2013 (Santee) – The second annual Waddle and Trot 5K run began and ended at the Pathways Community Church, the sponsors of the event.  Proceeds will be evenly split between the Santee Santas and the Santee Food Bank.  This was a certified 5K run on a fast and nearly flat course around Santee Lakes.  The family-friendly event attracted serious runners to casual walkers on a sunny beautiful Thanksgiving morning.

On the starting-line were contestants with team shirts and bright-colored running-shoes.  In the middle of the crowd were great grandfathers, teenagers, parents with infants and children.  Near the back were dozens of strollers with precious cargo along for the ride.

This was my first 5K run ever and I found myself locked in an epic battle for last place.