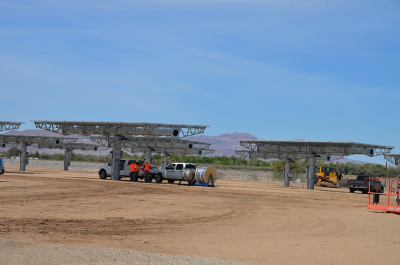 March 1, 2014 (San Diego’s East County)—Developers frequently put “spin” on project descriptions to emphasize benefits rather than negative impacts.  But certain statements by Soitec representatives regarding its proposed solar projects in Boulevard and a recent project in the desert fall into the “Pinnochio” category. In fact Soitec representatives misrepresented glare issues and the amount of land that is disturbed by their projects.

During a Soitec community meeting at the Manzanita Diner last month, ECM’s editor asked Soitec media and communications advisor Karen Hutchens specifically about a moratorium on solar projects approved by San Bernadino County Supervisors amid concerns about glare in Newberry Springs, where Soitec built a project very similar to its proposed Boulevard sites.  Hutchens responded, “That had nothing to do with our project. The moratorium was passed before our project was even built.”

But Robert Berkman, head of a citizens group in Newberry Springs called CEQA-NOW, told ECM that statement was a bald-faced lie.  “The moratorium came out because of the Soitec project—after it was built,” he said, adding that citizens invited Supervisors to visit the site.  Supervisors said, “’`Good grief, what has happened here? ‘ “ Berkman stated. “The moratorium occurred because we were able to bring them out and say `This is an example of solar done wrong.’”

That's not the only disputed statement by Soitec.