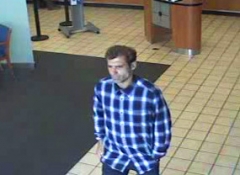 November 8, 2010 (San Diego) -- The FBI and San Diego Police Department seekthe public’s assistance to identify a man responsible for robbing the Chase Bank at 6116 Mission Gorge Road, San Diego, on Saturday, November 6th at 3 p.m. The robber made a verbal demand for money in a soft but intense tone of voice, according to FBI special agent Darrell Foxworth. At one point during he stated “don’t mess with me.” The teller provided the robber a sum of money and he left on foot.

May 13, 2010 (San Diego’s East County) – Shortly after noon yesterday, a tall man wearing a white, stretchy mask passed a demand note to a teller at Chase Bank on Navajo Road near Lake Murray. He claimed to have a bomb and threatened to detonate it with a hand-held device resembling a cell phone.