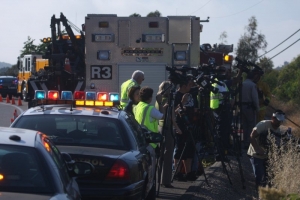 June 30, 2010 (Lakeside) – San Diego Sheriff’s Department today announced that it is investigating the deaths of two women found yesterday as homicides. The bodies were found approximately a mile and a half north of Slaughterhouse Canyon off the eastbound side of Highway 67 in Lakeside after a neighboring property owner reported that he had found a dark blue vehicle that plunged 200 to 300 feet down an embankment.