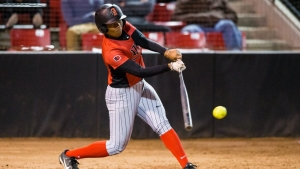 In the second game, Adams hit a three-run home run in the top of the first inning and added a solo homer in the sixth to lead SDSU to a 5-2 win.

It appeared San Diego State was going to go quietly in the first, but Maddi Ayers doubled with two outs and Molly Sturdivant followed with a four-pitch walk. Adams then took a 2-1 pitch over the left-field wall to put the Aztecs up, 3-0.

BS answered in the bottom of the first with a pair of solo homers by Kora Wade and Bradie Fillmore off SDSU starting pitcher Marissa Moreno, one of few mistakes Moreno (7-4) made in the game.

Adams struck again in the sixth when she drilled a 1-1 pitch over the center-field fence to make it 4-2 San Diego State. It could have been more, but Aris Metcalfe was thrown out trying to steal second base prior to the home run. It was the third home run of the season for Adams, all over the last three games. She is now hitting .533 (8-for-15) with three homers and eight RBIs in five Mountain West games.

The Aztecs added to their lead in the seventh when Gaby Olivarria scored from third on a passed ball after earlier replacing Kylie Fraser following a single.

Moreno settled down after the two-homer first inning, allowing just four baserunners the rest of the game. She finished with two runs allowed on five hits and two walks over the complete game victory, while striking out five.

In the opener, San Diego State managed only four hits against Kelsey Broadus in a 7-0 loss.

Kiera Wright led the way with a single, walk and her 15th stolen base of the season (in 15 chances).

MJ James took the loss after surrendering four runs (three earned) on eight hits over 3 2/3 innings, dropping to 3-6 on the season. Alicia Garcia also pitched for the Aztecs, yielding three runs on three hits, two walks and a hit batter over 2 1/3 innings, while striking out one.

In the second game, SDSU improved to 11-3 on the season when scoring first (4-12 when opponent scores first).

In the nightcap, 1B Taylor Adams became the first Aztec with two home runs in a game since Molly Sturdivant had two against Western Michigan on Feb. 9, 2018. Adams is the 13th player in school history with multiple home runs in the same game.

The rubber game of the series between the Aztecs and Broncos is at 1 p.m. MT (noon PT) Saturday.

Moreno and Sturdivant; Mancha and Huchingson