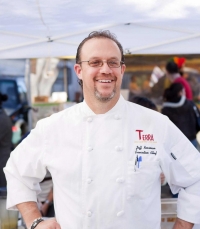 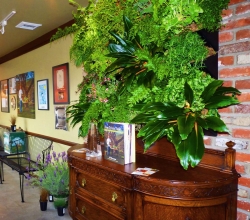 April 7, 2011 (San Diego’s East County) – Not every new restaurant parks a tractor outside. But for Jeff Rossman, executive chef and owner of Terra American Bistro, the vehicle symbolizes his commitment to supporting local farmers.

“East County needs a farm-to-table restaurant that focuses on sustainability and supporting local growers, artisans and families,” says Rossman, who is also the author of the new cookbook, From Terra’s Table: New American Food, Fresh From Southern California’s Organic Farms.” For 13 years, Rossman ran the popular Terra Restaurant in Hillcrest. But last month, the East County native closed the doors in Hillcrest and decided to return to his roots by opening up a new restaurant that’s closer to farmers—and many of his existing customers—in East County.

“At least 30 to 40 percent of our clientele lives in East County, but there’s no one out here doing this kind of food,” says Rossman, who offers up several other reasons for making the change. The Hillcrest restaurant was in a busy shopping center where parking was “a nightmare for everyone.” The address couldn’t be found in a Google search or with GPS. The landlord raised the rent and commuting from East County had grown tiresome. 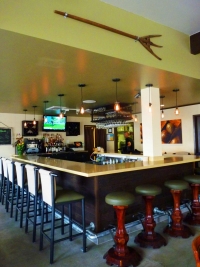 So Rossman, who grew up in San Carlos, decided to remodel a building that’s been occupied by various restaurants from Leonardo’s to a taco shop. Ample parking and a kitchen large enough to accommodate the restaurant’s catering business were big attractions.

Don’t expect a carbon copy of the Hillcrest establishment, however. The former sported white tablecloths. You won’t find those at the new eatery. Instead, Terra American Bistro combines an earthy farmhouse décor with recycled materials and appetizing images from Rossman’s cook book. 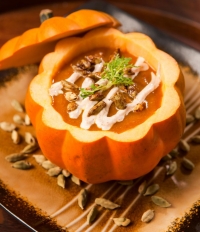 But you’ll also see some new attractions, such as flatbread pizzas and an assortment of sliders. Breakfasts include a variety of omelets, scrambles and huevos rancheros as well as temptations such as Terra’s stuffed French toast stuffed with homemade ricotta cheese, strawberries, and blueberry jam. 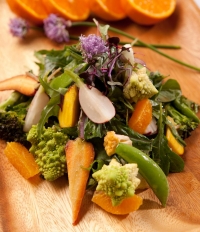 Cuisine will be 90% from locally-grown ingredients, also including hormone-free and antibiotic free meats from humanely-raised animals and free-range chickens. There are also many items for the vegetarian palatte, including an organic farmer’s salad featuring “fresh picks at the Chef’s whim.”

“I’m doing my own seasonally infused vodkas and simple syrups, such as ginger, lemon grass and rosemary,” Chef Rossman says. Tempting offerings include Strawberry and Mango Sangria, Ginger Lemongrass Mojito, and the saucily named Flirtini and Love in a Glass specialty cocktails. 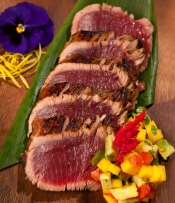 Beverages also include wine and beers on tap (including some from local vintners and brewers), as well as fun non-alcoholic drinks such as Ginger Lemongrass Lemonade and The Boulevard (mint, strawberry, rosemary syrup, lime and soda).

The talented chef will also serve up special tastings for a farmhouse table that seats ten. He plans to host monthly wine- and beer-paired farm-fresh dinners featuring appearances by local growers. The restaurant’s website features tours of local farms, photos of the farmers, recipes, and menus. 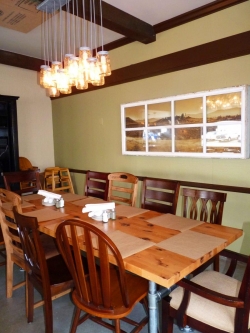 Creating the farmhouse table became a family affair. “Me and my mom went out to Lakeside and distressed it with chains, saws and torches,” he explained. “It was fun!”

“We made this bar out of reclaimed wood from Habitat for Humanity,” Rossman said in an interview with ECM shortly before the opening. “The top is Caesarstone from quartz.” Ceiling panels are made from burlap coffee bags, while an antique armoire hides high-tech gear.

The restaurant’s entry features a living wall of plants created by Jim Mumford. . Soon, a rooftop garden designed by Karyn Sklar will enable Chef Rossman and his catering crew harvest vegetables and herbs on site. 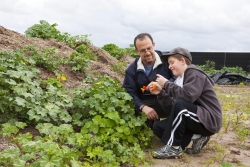 Wow it's great restaurant i belive and the foods are very nourishing to me. I have some website about drink as well that i really love to create the good recipes too for it.

This new restaurant is interesting.The menus look so delicious and the environment and it's ambiance look so calm and relaxing. You will definitely feel at home.

The new restaurant looks so fresh with nice nad delicious food too.I would like to visit there.
healthmaster promo codes

The new restaurant looks so fresh with nice nad delicious food too.I would like to visit there.
healthmaster promo codes