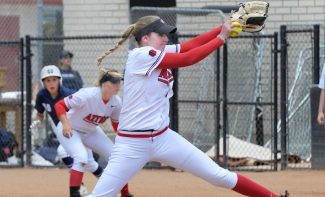 Formby has spent the last two years with the Aztecs after transferring from Virginia for the 2016 campaign. The right-handed pitcher has one 18-14 with a 4.01 ERA and 10 saves over her two seasons with SDSU, starting 20 times and appearing in 65 games. She has pitched 193 2/3 innings, striking out 127. Heading into her final campaign, Formby ranks third all-time at San Diego State in saves (10) and 10th in win percentage (.563).

Last season, Formby went 7-4 with a 4.55 ERA and a team-high five saves, striking out 44 against 28 walks in 77 innings. In 2016, she was 11-10 with a 3.66 ERA and five saves over 116 2/3 innings, striking out 83 against 57 walks, while being named a second-team all-Mountain West pick. She’s also two-time MW Scholar-Athlete and a two-time MW Spring All-Academic Team selection. Formby currently has a 3.66 cumulative GPA and is majoring in communication.

Ercolano spent the last three years of her softball career at San Diego State after transferring from UC Riverside for the 2015 season. After redshirting 2015, she played in 38 games with 13 starts in the following seasons. Ercolano batted .205 with a home run, eight RBIs, five runs and three walks in her last year as an Aztec. Over her four-year career, she batted .259 with 13 homers, 56 RBIs and 37 runs, while going 12-16 with a 5.03 ERA on the mound in 213 innings. Ercolano played in 12 games last season, including the final home game when she helped SDSU beat UNLV with a grand slam.

Ercolano was a MW Scholar-Athlete and a member of the MW Spring All-Academic Team in 2016. She majored in psychology and has cumulative 3.68 grade-point average for the 2016-17 academic year.

Orlando played in 143 games over her career with 101 starts, mostly at catcher, and posted a .251 average with 43 RBIs, 18 doubles and 25 runs. She had just 10 errors in 469 chances in her four seasons with the team. Orlando appears four times in the SDSU record books, including a .983 fielding percentage as a freshman, the fifth-best by an Aztec rookie in school history.

Last season Orlando played in 35 games with 22 starts, recording career highs with a .321 batting average, a .359 slugging percentage and a .354 on-base percentage, while committing just one error in 45 chances on the field. Academically, Orlando is a three-time MW Scholar-Athlete and a three-time MW Spring All-Academic Team member. She majored in criminal justice and graduated with a 3.81 GPA for the 2016-17 academic year.

SDSU kicks off its fall slate on Oct. 25 against Southwestern CC at 5 p.m. PT, while the spring schedule will be announced in the coming weeks.