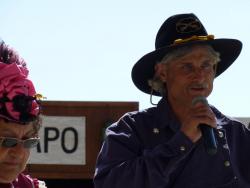 While the Gaskill Brothers Gunfighters get ready to go on stage, a few men on horseback-some real rough-looking fellows-ride in and out of town. With a cigarillo between his teeth, one outlaw rides with a rifle aimed up and resting on his thigh. The town set behind the riders is made up of the Campo Store, Cantina, telegraph office, Campo Hotel, blacksmith shop, barn, and stables. Bryon Harrington, reenactor and author of Campo: The Forgotten Gunfight, narrates and the tale unfolds.

We first see the banditos with Cruz Lopez, Jose Alvijo, Fedoro Vasquez, Poncho, Martinez, and others. They have just lost their leader, Clodoveo Chavez. Their new leader: Cruz Lopez.  Now the gang listens to Cruz as he goes over the plan to attack Campo; the plan which Chavez had hatched before he lost his life…and his head. 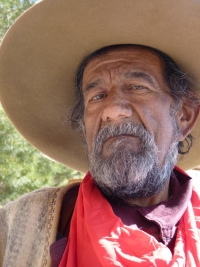 Cruz figures they can catch the main citizens of the town, the Gaskill brothers, unawares. Get their supplies for Sonora, the cash box. And ride away to the border to safety. However, they are overheard discussing the plan. Now with this lucky break, Campo has time to prepare. In the skit, this informant is played by a young boy. In real life, the identity of that person was protected by Silas Gaskill; some believe it was Captain Billy, a Kumeyaay Indian. Click here for the fascinating history of the period of unrest which gave rise to the Campo Gunfight and facts about the gunfight.

In the skit, the Gaskill brothers-Silas and Lumen-and the townsfolk discuss what they should do. They decide to get their weapons and lookouts, and defend the town. Later on, after an older couple leaves the Campo Store. The gang enters the town of Campo. Silas Gaskill is working at his Blacksmith shop opposite the store. The Campo Store is run by his brother, Lumen.

The bandito Cruz goes to the store and asks Lumen for a silver saddle he once wanted to buy. Lumen tells him he already sold it. Cruz is burning mad and curses Lumen. Then after asking Lumen for some rope, Cruz shoots him. Lumen yells, “Murder!” and the rest of the gang opens fire on Silas and a character called Frenchy. There is shouting, gun shots fired, and smoke. Men lie dead on the dirt road. Two of the banditos limp away with the cash box. People run in to help. Some lock up the prisoners and others help the wounded. Jack Kelly, the telegraph operator, sends word to Sheriff Hunsaker of San Diego and asks for the doctor.

The skit ends with narration tellin 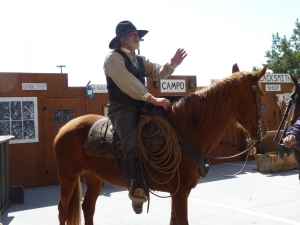 g the crowd that after Campo successfully fought off the gang, there were no more border raids. The surrounding area was much safer afterward.

The reenactors take a bow and some stick around to be interviewed. Click here for interviews with the reenactors.

The event drew a sizable crowd on a beautiful, breezy East County spring day. Before the shootout, the audience enjoyed the sounds of the Damian Bowls Band. Acorn Casino invited the audience, the band, and actors to enjoy a Prime Rib dinner after the shootout for only $7.99 (with a Players Gold Club card).

Banditos plot to rob the town:

Ariele Johannson acknowledges Bryon Harrington, author of Campo: The Forgotten Gunfight (Copyright 2009-ISBN: 1453637842), for historical references in the article. The book was reviewed by East County Magazine July 3, 2011. If interested in Bryon Harrington’s book or the Gaskill Brothers Gunfighters, visit the website www.campogunfight.com.