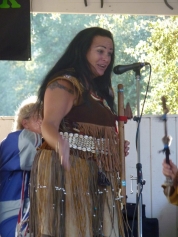 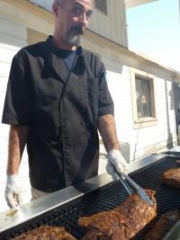 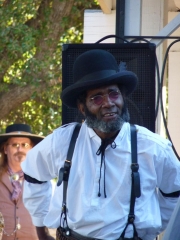 In addition to delicious barbecue-grilled tri-tip and chicken served up by Descanso Junction, guests enjoyed lively entertainment by the Pine Creek Posse Band, Western reenactors Gaskill Brothers Gunfighters and the Hole in the Wall Gang, as well as music by Wind Wind Spirit Drum, winners of the national Native American Music Awards.

“We’re delighted at the success and hope to hold a similar event at this historic setting in the future,” said ECM editor and founder Miriam Raftery.  The benefit raised funds to support wildfire reporting to supplement the Viejas Wildfire & Emergency Alerts provided by East County Magazine via e-mail, Twitter, and on KNSJ 89.1 FM radio.

August 16, 2013 (Campo) – The “Gaskill Brothers Gunfighters” will be putting on a reenactment of the Campo Gunfight at Golden Acorn Casino as part of the casino’s BBQ Cook-off.  The cook-off is a free event and runs 10 a.m. to 3 p.m.

The skit’s director and producer, Bryon Harrington will narrate the show. He has authored the novel “Campo the Forgotten Gunfight” and will be signing copies of his book after the show.