“It exceeded all our expectations,” said John York, president of the Ramona Valley Vineyard Association, in an interview with the Union Tribune. “Frankly, I’m 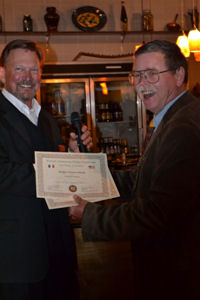 stunned that we took all the awards. The folks in Ramona are very excited about the outcome.”

And excited they should be. A panel of French and American judges, which included Lum Eisenman, winemaker and mentor and Michele Malecot, owner of the French Gourmet restaurant, evaluated three different samples of wine: cabernet franc, sauvignon blanc and syrah and determined Ramona wines as the victors in all three categories.
A 2008 Cabernet Franc from Woof’n Rose Winery beat a 2010 Thierry Germain from the Loire Valley.
A 2010 sauvignon blanc from Milagro Farms Vineyard and Winery stumped a 2009 Simmonet Febvre from France’s Burgundy region.
Finally, a 2006 syrah from Edwards Vineyards and Cellars, defeated a 2007 Vidal Fleury from the Rhone Valley.
After the judging, the public was invited to taste wine and food pairings where the cabernet franc from Woof’n Rose Winery won its second award of the night, earning the title of “People’s Choice.” 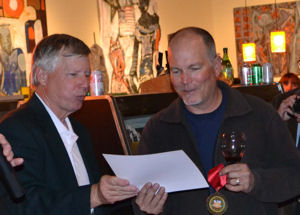 “I was so proud to watch people try Ramona wines, hearing how great the Ramona wines were, and even prouder when as each contest winner was announced, it was Ramona, in a clean sweep of the event,” said Teri Kerns, co-owner of Ramona Ranch Vineyard and Winery, in her blog post on Ramona Patch.
The Ramona wines entered in the competition were selected by York. French  entries were picked by John Alonge, Alliance Francaise, owner of the San Diego Wine and Culinary Center. Wines were judged double blind and followed the rules and guidelines set by the American Wine Society.