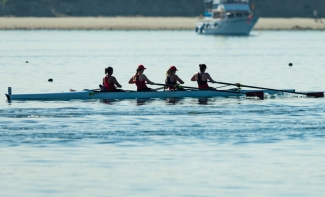 May 31, 2017 (San Diego) - The Collegiate Rowing Coaches Association announced the list of CRCA National Scholar Athletes for the 2017 season, naming rowing’s Emaleigh White and Nadirah Jamaludin as award recipients. Both student-athletes are first-time recipients of the award.

White, who will enter her junior year at SDSU in the fall, is pursuing a degree in political science. White has two letters under her belt as a member of the second varsity eight boat, typically competing as the sixth seat during the 2016-17 season.

Jamaludin finished her sophomore year in the spring of 2017 with experience racing in the second varsity four boat and the third varsity eight boat. The Kaula Lumpur, Malaysia, native is currently majoring in psychology.

In order for a student-athlete to qualify for the award, they must hold a 3.5 cumulative GPA or higher for her career, be in their second, third or fourth year of eligibility, meet all of the institution’s eligibility rules and race in an NCAA-eligible boat in a minimum of 75% of the spring races, or in a regional conference event.