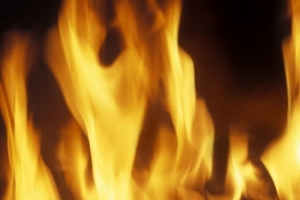 Update February 25, 2017 :  The victim has been identified as Santee resident Andrea Daves, 33. Cause and manner of death will be determined by the medical examiner.

February 23, 2017 (Lakeside) – Sheriff’s deputies responded to a vehicle fire on a cul-de-sac in the 11200 block of Mast Boulevard in Lakeside last night shortly after 11 p.m.  They found a vehicle fully engulfed in flames.