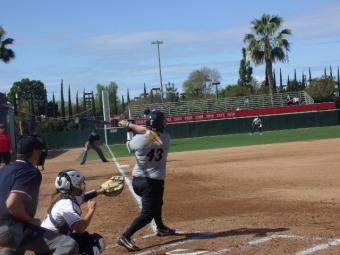 February 18, 2018 (San Diego) - San Diego State softball is...struggling, to say the least.  They’re 1-8 on the young season, but things don’t seem to be getting better.  Now, in the final game of the Campbell-Cartier Classic, they had a chance to redeem themselves against CSU Fullerton.

The Aztecs got off to a rocky start.  After a leadoff walk to senior Brooke Clementson, junior Ari Williams singled and Clementson beat out a throw to home to give Fullerton a 1-0 lead.

But Molly Sturdivant wouldn’t let that fly.  The hard-hitting junior absolutely crushed a double and the Aztecs tied the game.

It remained deadlocked until the fifth when the Aztecs took some initiative and it was all thanks to West Hills grad Katie Byrd.  The junior hit a short single, but it was enough to get senior Zaria Meshack home.  SDSU held on for two more innings to get the 2-1 win and end the Triple C on a high note.  Senior Alex Formby gets the save.

With the Campbell-Cartier Classic over, the Aztecs hit the road again to face Liberty in Cathedral City on Thursday.  First pitch is set for 8:30 p.m.