Tough-to-build line was once called the “impossible railroad” 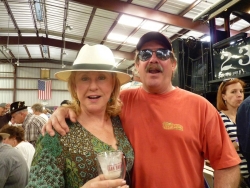 April 18, 2011 (Campo) – More than 400 fans of fine foods, winetasting and vintage trains turned out on April 2nd at the“Chef’s Fire Up the Iron Horse” celebration to commemorate the 50th anniversary of the Pacific 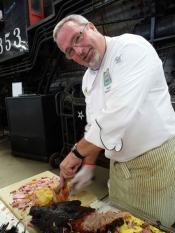 Chefs de Cuisuine carved up up a whole roast pig as well as other mouth-watering dishes served up at seafood, barbecue and dessert stations. Owners of local wineries poured a generous array of samples at the San Diego County Vintners Association table. Other sponsors included Ballast Point Brewery, Café Calabria, and Viejas. 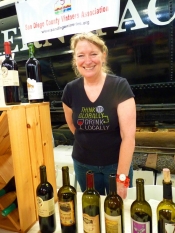 Visitors walked through vintage trains on exhibit inside the Museum and also rode the rails along the historic line to the Carriso Gorge and back. Once, the tunnel connected through to Mexico. But a collapse forced closure of the Mexican side of the line. 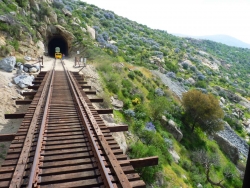 Still, the experience is well worth the ride—not only for breath-taking views of the Carriso Gorge and wild lilacs abloom, but also the tales told by brakeman Dick Pennock, who has been working on the railways since the earliest days of the Pacific Southwest Railway Museum.

View video of the brakeman’s reminiscence about how he nearly lost his head: http://www.youtube.com/user/EastCountyMagazine?feature=mhum#p/u/3/7kmMh_... 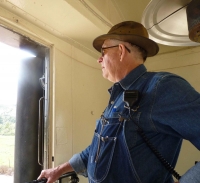 View video of his tale about riding under the rainbow: http://www.youtube.com/watch?v=oEDZui_uwvE

View video of Pennock’s narrative about the railway’s history: http://www.youtube.com/user/EastCountyMagazine?feature=mhum#p/a/u/2/nmAD...

The Museum, established in 1961, preserves the colorful history of the San Diego and Arizona Railway—a line that early surveyors called the “impossible railroad” due to the difficult terrain. 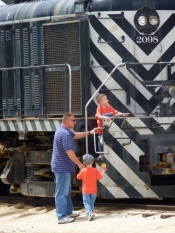 The San Diego and Arizona Railway Company was incorporated secretly in 1906 by John D. Spreckels and his brother, Adolph B., sons of the sugar king Claus Spreckels. They were backed by Edward H. Harriman, the railroad magnate who controlled the Union Pacific Railroad and Southern Pacific Company.

But the ill-fated San Diego-Arizona Railway suffered a string of calamaties. In 1907, a Depression made funding nearly impossible to obtain. Two years later, Harriman died and his successor cancelled the contract with Spreckels, forcing the latter to raise money single-handedly. Then came a wave of revolutions in Mexico in 1911, when Mexican laborers left the job until insurrectionists surrendered and work could be continued. A lawsuit in 1912 filed by Southern Pacific seeking $3 million from the Spreckels company also threatened to derail the project, but the suit was dismissed in 1916, compelling the Southern Pacific to retain its interest in the railroad. 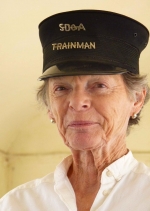 World War One halted money for railroad construction, but Spreckels persevered. Yet another catastrophe struck in 1916, when devastating floods collapsed the Lower Otay Dam, washing away much of the work. An engine was derailed and sank in sand and mud in nearby Sweetwater Valley, where the engineer and a fireman narrowly escaped losing their lives.

The rails reached Campo, 65.3 miles from San Diego at an elevation of 2,585 feet, on October 2, 1916. The final connecting section was completed on November 15, 1919, when John. D. Spreckels stripped off his coat and drove a golden spike (then valued at $285) in Carriso Gorge. 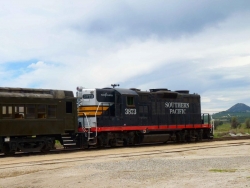 On December 1, 1919, according to a biography of Spreckels penned by H. Austin Adams, “At twenty minutes to four…occurred an event so long hoped for and so often put off that pioneers had grown old looking for it to happen, and even the most optimistic were beginning to fear that it never would happen. And now it had happened! A train rolled into the Union Station and San Diego, at least, ad come into her own as the Pacific Coast terminus of a transcontinental railway system.” 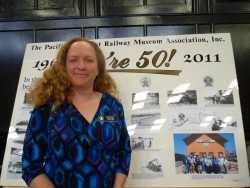 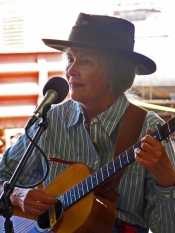 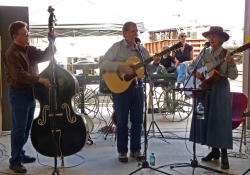 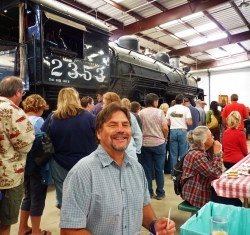 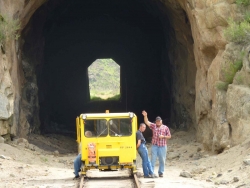 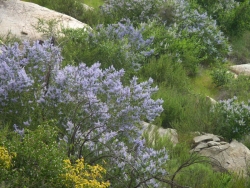