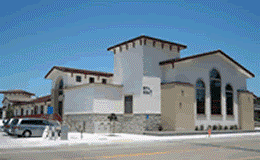 January 30, 2017 (La Mesa) – When La Mesa’s old police station was torn down and a new one built on the site of the aging County library that was torn down, a modest new library was built that was intended to be temporary, with a larger, new library proposed to be built on the site of the old police station. But a decade after efforts to build a new library began, the interim library building remains, with no plans yet submitted for a replacement—much to the consternation of library patrons advocating for a more spacious facility to meet modern needs.

Speaking at a La Mesa Chamber of Commerce meeting earlier this month, Supervisor Dianne Jacob stated, “The city owns the property the police station was on.  The city needed to either build a bigger library, or pay the County for the appraised value.  We received a letter from the city stating that they will pay the appraised value, so it sounds to me like they have decided not to build a new library.” (See County’s letter to La Mesa, and La Mesa’s response to the County)

East County Magazine asked La Mesa Councilman Colin Parent, who is newly appointed to serve on a subcommittee tasked with recommended the future for the police station site and the civic center.

“To my knowledge, La Mesa has not yet decided whether or how to build either a new library or new expanded library space,” Parent told ECM.  “La Mesa does have an obligation to build a new library, or to pay a fee to the County. But its not required to be on the old police station site. We may negotiate some middle ground solution with the county. I personally am committed to building some new library space as a part of any civic center expansion or construction.”

He added, “The City is not required to build new library space on the old police station site. But we are required to use that site, or proceeds from its sale, for affordable housing. That is a part of our obligations under the dissolution of our former redevelopment agency.”

Parent said he looks forward to resolving “both our affordable housing and library responsibilities in any development plan for that general area.”

Next up, he said, the subcommittee will be presenting any proposed use of the old police station, and/or redevelopment of the civic center, we'll in advance of any public vote.

“That will ensure sufficient time for a robust public discussion,” the newly elected Councilman pledged.