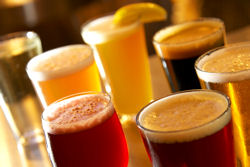 Book Signing with Greg Koch from Stone Brewing Co. Takes Place at Yard House on May 3 During the Craft Brewers Conference
May 1,2012 (San Diego) – The Craft Brewers Conference gets underway in San Diego May 2-5 and Yard House, which helped to fuel the craft brew craze 15 years ago when it opened its 250-tap flagship restaurant in Long Beach, will host two events before and during the gathering at its Downtown location at 4th and Broadway.

Beer enthusiasts can meet Firestone Walker Brew Master Matt Brynildson on Tuesday, May 1 from 5-9pm.  There will be opportunities to sample some unique beer offerings on tap from Firestone Walker, including:

Firestone Walker will also have bottled beer available that guests can have signed by Matt.  Parabola, a barrel aged Russian Imperial Stout with 13.0% ABV, is one of Firestone’s most aggressive offerings and part of their Proprietor’s Reserve Series.  This bottled beer, which is also offered on tap, features bold bourbon and tobacco aromas and a rich dark chocolate, charred oak flavor.
Yard House will also host a book signing on Thursday, May 3 from 6-7:30 p.m. with Greg Koch, co-founder and CEO of Escondido-based Stone Brewing Co. Coincidentally, Koch started the brewery with partner Steve Wagner in 1996 – the same year the first Yard House opened along the Long Beach waterfront.
Just like Yard House, which is one of the fastest growing and highest rated restaurants, Stone Brewing Co. has become one of the fastest growing and highest rated breweries ranking the 14th largest craft brewery in the nation. Koch will sign his book, The Brewer’s Apprentice. The Craft of Stone Brewing Co., which delves into the history of the company with a behind-the-scenes look inside brewing process with tutorials from some of the best minds in the business.
During the book signing guests can also sample unique beer offerings from Stone Brewing Co., including:
Double Dry Hopped Ruination with Amarillo Hops
7.7% ABV – Imperial IPA So called because of the immediate ruinous effect on your palate. 100+ IBUs. This double dry hopped version uses Amarillo hops which have a decidedly pungent aroma of tropical citrus fruits.
Levariation
5.3% ABV – Amber Ale with Belgian Yeast This rich, deep amber ale with roasted malt flavors, big hoppy character and citrus overtones is made even better with the addition of Stone Brewing’s special Belgian yeast strain.
Double Bastard Ale
10.5% ABV – 2011 Vintage American Strong Ale The evil big brother of Arrogant Bastard is a punishingly unforgiving assault on the palate with caramel, dark fruit flavors that blend in with a bitter, hopped up, spiced vanilla finish.
Mixtape
6.6% ABV – GK & LU’s Blend Vol.1 A calculated mingling of seven different Stone brews devised by CEO Greg Koch and brewer Laura Ulrich along with sage, hot peppers, lemon thyme and Citra hops… epic!
Suitable For Cave Aging
8.9% ABV – Imperial Smoked Porter An Imperial version of Stone’s now classic Smoked Porter brewed in tribute to Danny Williams and his collection of 2,500 bottled beers he stored in a defunct gold mine. Smoky, dark and rich.
Yard House recently introduced its Chalkboard Beer Series, which features a selection of small, limited releases from mostly craft brewers that rotate frequently keeping the selection both innovative and fresh.  These featured beers are listed on a digital chalkboard prominently displayed above the island bar.  This week’s Chalkboard Beer Series will showcase brews from both Firestone Walker and Stone Brewing Co.
Reservations are not required to attend the Meet the Brew Master event and book signing.  Meet the Brew Master with Matt Brynildson from Firestone Walker takes place this Tuesday, May 1 from 5-9pm.  Greg Koch, founder and CEO of Stone Brewing Co., will sign his book The Brewer’s Apprentice. The Craft of Stone Brewing Co., on Thursday, May 3 from 6-7:30pm.  Books will be available for purchase.

Yard House, which opens at 11am daily for lunch, dinner and late-night dining, is located at 1023 4th Avenue in Downtown San Diego at the corner of Broadway adjacent to Horton Plaza.  For directions, information and call-ahead seating, call 619.233.YARD (9273) or visit online at www.yardhouse.com