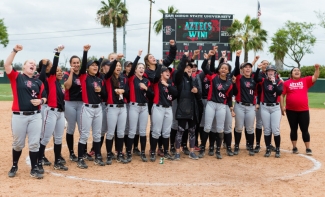 May 12, 2018 (San Diego) - Senior Zaria Meshack hit a walk-off single in the bottom of the seventh inning to give San Diego State the series sweep over Utah State Saturday afternoon at SDSU Softball Stadium. The Aztecs finished their season with a 20-31 overall record, including an 11-13 mark in Mountain West play.

Down, 3-2, on a Brina Buttacavoli two-run home run in the top of the sixth, SDSU rallied in the seventh when Kelsey Munoz led off with a single and was replaced by pinch runner Aris Metcalfe. Metcalfe then moved to second on an Aggie (18-34, 7-17 MW) error and scored on a second USU miscue. With Janina Jusay on third after the second Utah State error, Meshack took a 0-2 pitch to left-center field for the walk-off hit in her final career at-bat.

The Aggies had taken a 1-0 lead in the first when Buttacavoli’s sacrifice fly to right field scored Jazmine Clarke.

Meshack led the way for SDSU with a single, run and walk, while Byrd, Munoz, Molly Sturdivant and Shelby Thompson also added hits.

Marissa Moreno picked up the win for San Diego State, allowing just two runs on five hits and a walk over six innings of relief, while setting a career high with seven strikeouts. Moreno (6-16) finished the weekend 2-0 with a 1.08 ERA in 13 innings, striking out 12 against two walks, limiting USU to a .140 average. Alex Formby started the game and gave up one run on two hits in one inning.

SDSU swept a MW series for the first time this season and first time since sweeping UNLV last year at home from May 5-6.