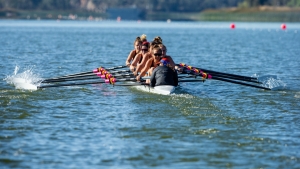 SDSU to compete in two fall events prior to spring slate

August 21, 2018 (San Diego) - San Diego State head rowing coach Bill Zack announced this week his team’s schedule for the 2018-19 season, with the Aztecs competing in two events in the fall of 2018 prior to beginning the regular season slate in the spring of 2019.

Two staples on the team’s schedule, the Aztecs will once again compete in the San Diego Row for the Cure, slated for Saturday, Oct. 13, and the San Diego Fall Classic, which is scheduled for Sunday, Nov. 11. Both fall events will take place on SDSU’s home water in Mission Bay.

The Scarlet and Black are set to compete in three scrimmages throughout the spring season, first hosting the Minnesota Gophers on Saturday, Feb. 9, at the Chula Vista Elite Athlete Training Center in Chula Vista, Calif. The following weekend, the Aztecs will compete in their annual scrimmage with Orange Coast College, UCSD and USD on Saturday, Feb. 16, on Mission Bay. The third and final team scrimmage comes at the end of regular season competition on Saturday, May 4, when SDSU hosts UCSB on Mission Bay.

The team’s first official race comes in its trip to Marina del Rey, Calif., on Saturday, March 9, when the Aztecs take on Stanford and host team, UCLA. The following weekend, SDSU travels to Gold River, Calif., to compete in Sacramento State’s Hornet Invitational, slated for March 16-17 on Lake Natoma. At the Hornet Invitational, the Aztecs are set to face host and conference opponent Sac State, as well as Saint Mary’s and Kansas State.

The Aztecs return from Northern California with three weeks to prepare for the San Diego Crew Classic, scheduled for April 6-7 on Mission Bay. The team will make one more trip to the Chula Vista Elite Athlete Training Center for a head-to-head event against UCSD on Friday, April 19, ahead of the WIRA Championships, which are slated for April 27-28 on Lake Natoma.

Following regular season races, the Aztecs will travel to Oklahoma City, Okla., for the American Athletic Conference Championships on Sunday, May 19.