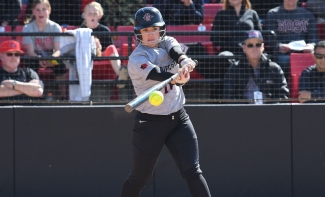 SDSU loses to Michigan State and No. 21 Long Beach State

March 10, 2018 (Long Beach) - The San Diego State softball team dropped a pair of games at the Louisville Slugger Invitational Saturday afternoon in Long Beach, Calif. The Aztecs (8-16) lost their opener to Michigan State 6-5 before falling to No. 21/rv Long Beach State in a rain-shortened five-inning game.

In the opener, Ebonee Echols hit a walk-off home run in the bottom of the seventh inning off SDSU pitcher Alex Formby to give the Spartans (10-11) the 6-5 win.

Down, 4-1, after an inning, San Diego State rallied to take a 5-4 lead, scoring twice in the third, once in the fifth and once in the sixth. In the third, a Taylor Adams single and subsequent fielding error scored Katie Byrd and Aris Metcalfe. In the fifth, Janina Jusay scored on a MSU throwing error. In the sixth, Byrd drew a walk and scored on a Molly Sturdivant double.

Michigan State, however, tied it in the bottom of the sixth when Melanie Baccay’s triple plated Kelsey Carrasco.

After the Aztecs went in order in the top of the seventh, Echols ended the game in the bottom of the seventh with a walk-off homer.

Adams and Sturdivant had two hits apiece to pace SDSU.

Formby (5-6) took the loss after allowing six runs on seven hits and three walks over 6 1/3 innings, striking out three.

In the second game, the host 49ers (19-6) scored three runs in the bottom of the first and never looked back in a 5-0 win over San Diego State.

Adams, Byrd and Zaria Meshack had the Aztecs’ three hits, while Megan Smith drew a pair of walks.

Marissa Moreno was charged with the loss after surrendering five runs (four earned) on seven hits and two walks over four innings, striking out one. Julie McDonald pitched the fifth inning and allowed one hit and a hit batter.

The Aztecs wrap up their play in the Louisville Slugger Invitational with a game at Cal State Fullerton at 10 a.m. Sunday.