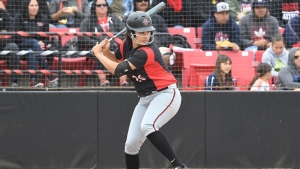 February 8, 2019 (Phoenix) - After scoring six times in the bottom of the seventh inning to rally past Syracuse, 9-8, in the opener, the San Diego State softball team made it a sweep in the nightcap with a 9-1, run-rule win over Charlotte Friday afternoon at Grand Canyon University’s Kickoff Tournament in Phoenix.

Down by an 8-3 score in the opener after the Orange (0-1) tallied a pair of unearned runs in the top of the seventh, the Aztecs (2-0) answered with six runs of their own, including five with two out, to pick up the win. In the inning, SDSU used three hits and took advantage of three SU errors. The first run came when Paige Barth’s fielder’s choice grounder scored Gaby Olivarria thanks to an error by the Syracuse second baseman. After a fielder’s choice led to the second out of the inning, Taylor Adams singled through the left side to score Kylie Fraser and Barth, bringing San Diego State within two runs at 8-6. Another Orange error with Kiera Wright at the plate allowed Kristen Parker to score, and Wright and Adams to move up a base. Katie Byrd followed with a single to right field to plate Adams and the speedy Wright to complete the improbable comeback for the Aztecs.

SU had jumped out to a 6-0 lead in the second on four hits and two hit batters.

SDSU got a run back in the bottom of the second when Janina Jusay scored on an error by the second baseman with Adams at the plate.

San Diego State got a couple of clean runs across in the third as Alicia Garcia’s double to left-center field scored Kelsey Munoz and Molly Sturdivant.

Neither team scored the rest of the way until the dramatic combined eight-run seventh inning.

Marissa Moreno settled down after the six-run second inning, scattering six hits, four walks and two hit batters over 6 1/3 innings, striking out six. Garcia got the two batters she faced in relief of Moreno in the seventh, eventually picking up the first win of her Division I career.

Getting the jitters out in the first game, SDSU put together a well-rounded effort in the nightcap in a 9-1, six-inning win over Charlotte. San Diego State outhit the 49ers (1-2), 11-7, in the game and committed only one error after three miscues in the first game.

Munoz had the game of her early career, going 3-for-4 with a home run, two doubles and six RBIs. Playing shortstop for an injured and reigning Mountain West Defensive Player of the Year Shelby Thompson, Munoz had a RBI double in the third, a two-run double in the fourth and a three-run homer in the sixth. A sophomore, Munoz’ three extra-base hits against Charlotte equaled her 2018 total spread across 28 games. Her six RBIs were also just two shy from her eight recorded all last season.

Adams added another two hits and scored a run, while Wright had two hits, two runs, an RBI and a stolen base. Byrd singled, walked, scored three runs and had a stolen base, Garcia drew a pair of walks, and Parker had a single and two RBIs. Parker, who’s first 27 games of her career from 2017-18 (just three appearances last season) came as a pinch runner, went 3-for-8 with two RBIs and a run scored over today’s doubleheader.

The offense was plenty for MJ James. James, who transferred to the Aztecs after redshirting last season at Ohio State, allowed one run on seven hits and two walks over six innings, striking out one to record the first win of her career.

By scoring nine runs in both wins today, SDSU has won 33 straight outings when scoring at least nine runs in a game.