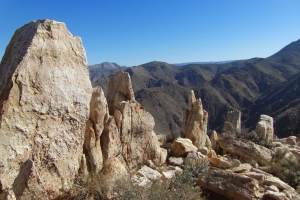 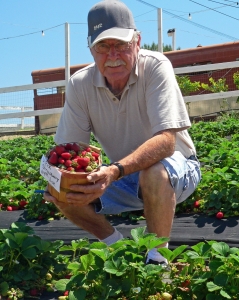 Originally inhabited by the Kumeyaay Native Americans and later visited by Spanish soldiers, Alpine served as a stage coach stop and soon attracted farmers, ranchers and other settlers. You can still find farm stands and ranches in the community today.  It has long drawn people attracted to what a government report once dubbed the “best climate in the U.S.A.”  Resorts sprung up and new ones continue to be built in our modern era. For more fascinating history of the region see the Alpine Historical Society website.

The Alpine-Mountain Empire Chamber has a calendar listing events year-round such as a holiday parade of lights and festival complete with snow hill in winter, outdoor concerts in summer and more. You can stop off for fresh-picked strawberries at the Frosty Acres fruit stand at the end of Alpine Blvd.(photo, right) 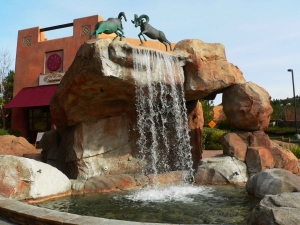 Viejas, just north of I-8 in Alpine, has two luxury hotels, the recently open Willows Hotel and Spa as well as the original Viejas Casino and Resort.  The Viejas tribe also operates the Viejas Outlets shopping mall (photo, left) and hosts community events such as summer movies in the park and outdoor ice skating in winter. The outlets center provides a charming place to stroll, with a southwest theme, bronzed animal statues, water features, pawprints embedded in meandering pathways and of course, factory outlet stores for bargain shoppers. There’s a wide range of restaurants at Viejas ranging from a steakhouse to Asian cuisine at the hotels as well as a food court at the outlets center. 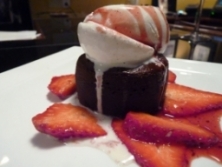 The Ayres Lodge Inn is within walking distance of downtown Alpine. The lodge has rustic charm plus modern conveniences.  Alpine has quaint shops, a new public library, and  many good restaurants ranging from delicious Mediterranean food at the Mediterranean Bistro to hearty fare at Janet’s Montana Café in a log-cabin rustic décor with antler chandeliers. 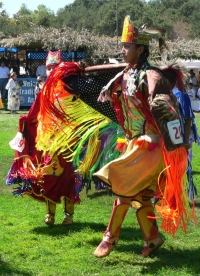 A few miles southwest of Alpine, the Sycuan reservation Is building a brand new 12-story hotel resort next to their casino. At summer's end, the annual Sycuan pow-wow is held, drawing Native American dancers and drummers from across the nation. (Photo, left). Just down the road there’s also the Sycuan Golf Resort. 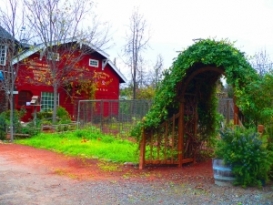 You can also find camping at Flinn Springs just west of Alpine.    A highlight in Flinn Springs is Summers Past Farms, a great place to stroll through fragrant gardens of blooming flowers and herbs (photo, right)

If you head east on I-8 and take the Descanso exit, the Descanso Junction café has a western theme with a bar made out of a tree salvaged from the 2003 Cedar Fire and brands from every local historic branch burned into the tabletops.  Further along, at the Pine Valley exit, Pine Valley County Park has campgrounds, ballfields and shady picnic facilities. Major’s Diner in Pine Valley provides burgers and malts served up in vintage ‘50s décor. 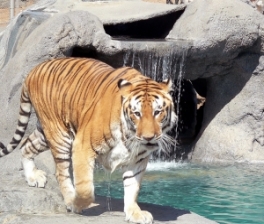 Other nearby points of interest include Lions, Tigers and Bears, an exotic animal rescue facility in Japatul Valley; call ahead for appointments. (photo, left) 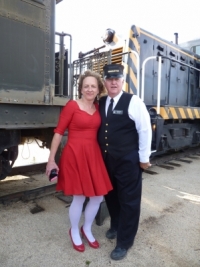 If you venture south to explore  the southeast border region, Lake Morena has rustic cabins and campgrounds. Lake Morena is also the gateway to the Pacific Crest Trail from the Mexican border to Canada.

Along the easternmost stretch of Highway 94 you’ll find Campo, famed for the Pacific Southwest Railway Museum where you can ride the rails aboard historic trains most weekends and the Old Stone Store Museum, famed for the historic Campo gunfight.

Farther east in Jacumba Hot Springs, a high desert community, there’s the Jacumba Hot Springs Resort, a one-story hotel with mineral water hot springs and pool.  If you venture east to Jacumba, it’s also worth a visit to the Desert View Tower, a whimsical roadside landmark. 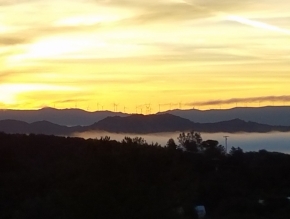 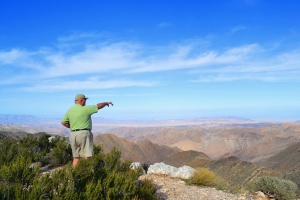 Some once-beautiful places, notably McCain Valley, have been sacrificed for large renewable energy projects.  You can still  view the Carrizo Gorge with four-wheel drive vehicles (photo, right), but the road to reach it through McCain Valley now traverses through towering wind turbines.

But if you put on your hiking shoes and hit the trail, you can still find pristine wilderness areas largely unchanged through the millennia.

The southeast region in San Diego's backcountry is definitely the road less traveled, but well worth taking.

McCain Valley's Cottonwood Campground user ratings have plummeted since it's been sacrificed to the wind turbines.   Who can enjoy the area knowing all things that fly (which includes bats) are subject to being killed 24/7 by impacts with the turbine blades?   The scenic vistas all around have been spoiled by industrial eyesores, both in the day and even at night with endlessly obnoxious red blinking lights.   The BLM needs to update their websire to reflect the reality of the situation.

in our guide article above, because I no longer recommend them due to the intrusive wind turbines there with flashing lights at night and noise issues. Sadly the BLM seems to have removed its site that used to talk about McCain Valley as a recreational site and before that, a wildlife preserve.  There isn't even a single photo on the BLM sites about the campgrounds, sad. Last time I was out to the Sacanaw Overlook the historical marker had been stolen. I have a photo of it if the BLM or anyone ever wants to restore it.  I did call the BLM once and they didn't care enough to call me back, very sad.