March 3, 2022 (Santee) -- As a city with one of the smallest minority populations in San Diego County and one that experienced some well-publicized racist incidents in recent years, Santee’s leaders realized they had to do something.

Stung by a barrage of negative publicity as a result of those incidents, the City Council unanimously   passed a resolution   disavowing racism and hate in June 2020, and asserting it was committed to welcoming those from diverse racial and ethnic groups.

It then went a step further, establishing a forum in April 2021 to explore the reasons behind the perceived racism by some residents against minorities, and what steps it could take to change those perceptions.

On March 1, 2022, the Council held another public workshop exploring diversity, equity and inclusion ((DEI), listening to a presentation by a contracted consultant, Richard Marks.

Marks, who spoke at another DEI workshop in November, noted everyone has unconscious biases based on who they are, how they were raised, and a whole host of influences (22 in all, the most prominent being age, raceand gender). All too often, the tendency in many humans is to call attention to differences and to ridicule others who have such differences, he said.

“When we use names like idiot or stupid, it’s destroying us, and our ability to get along and see others as individuals,” Marks said. “We can do better. We should do better; we have to do better.”

Referring to a survey done for the city about Santee’s quality of life, its values, and experience in terms of racism, Marks said a large majority of the city’s residents were satisfied overall with the quality of life, but young adults and Hispanics were less likely to feel the same way. 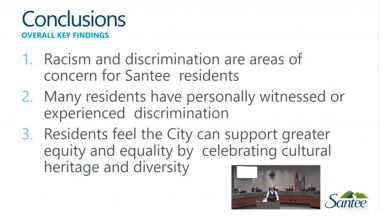 Marks, who is black, likely hit a raw nerve among many listeners when he related a personal story that occurred on his previous job. He said one day, a co-worker asked him where he was headed to, and when he said, Santee, the co-worker responded, “Oh, you mean Klantee?” She followed by warning, “You need to be careful, Richard,” he recalled.

At that time, Marks said he had been to Santee numerous times and never encountered anything racist; instead he described his time spent there as “phenomenal.” Yet, if he allowed the co-worker’s statement to affect his thinking, he might have been looking for that, he noted.

“I’ve always had great experiences here, but I also understand that others may not,” he said.

Following the presentation, those attending the workshop provided their ideas on what the city should do regarding DEI. The suggestions included holding public events celebrating various ethnic groups or acknowledging special months, such as last month’s Black History Month. Others asked the city to set up a venue or department to field reports of discrimination, or assist in erecting artwork celebrating different races and ethnic groups.

Mayor John Minto said while other leaders of cities and agencies in the state were developing some sort of DEI policy, Santee’s council and staff were actively engaged in opening up and doing so in a public forum to talk about what it all means, and how to address it.

Minto said in the spirit of inclusion residents should make an effort to get to know their neighbors better, and reach out to folks they don’t know occasionally by just saying hello. “I don’t think enough of that goes on anymore,” he said.

Councilman Ronn Hall said the city could help set up DEI training with the private sector, or work with the local school districts to partner in some type of DEI events. Councilwoman Laura Koval said there are ways to celebrate cultural diversity by using the parks and existing events such as the summer concert series, or the bluegrass festival.

Councilman Rob McNelis said the city could make a video advocating for residents to treat everyone with respect, while Councilman Dustin Trotter noted that March is Women’s History Month.

Ultimately, Santee plans to adopt a community values statement on DEI that will describe its core principles or standards that community residents wish to maintain, according to a city report. Those core principles “must be acknowledged, honored and constantly defended to ensure that change and development occur in accordance with those,” the report said.

To view the complete DEI workshop, go to the city’s website at www.cityofsanteeca.gov.

the minds of the right white nothing will change. these people were brought up by parents who did not teach their kids everyone is equal because they themselves do not believe everyone is equal.