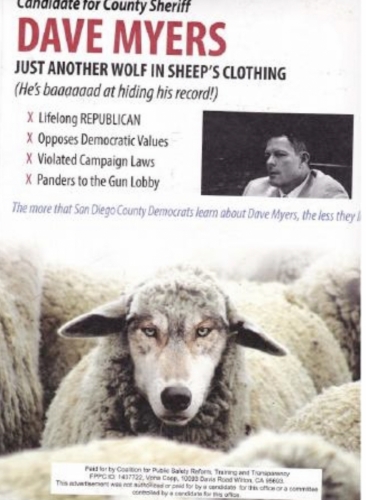 May 20, 2022 (San Diego) – Mailers landing in mailboxes and an online ad on Facebook contain deceptive messages regarding Sheriff candidate Dave Myers. The ads falsely state that Myers is a “lifelong Republican” who opposes democratic values, depicting him as a “wolf in sheep’s clothing.”  But in fact, Myers is the only candidate in the race who is endorsed by the state and county Democratic parties.  He was also endorsed by the Democratic party in a prior run for Sheriff as well as when he ran for La Mesa City Council.

“It’s nothing but lies,” Myers says of the flyer funded by the Coalition for Public Safety Reform, Training and Transparency, a shadowy group that has been responsible for other misleading mailers in past elections. State expenditure forms reveal that the Coalition paid $49,693.70 on May 5 for ads against Myers and that the County Deputy Sheriff’s Association of San Diego County PAC paid the Coalition $49,900 one day later.

An online ad on Facebook contains similar messaging but also morphs Myers’ picture into a demonic-looking image with a dark face. “Using blackface to depict a candidate, is one of the oldest racist tropes to try and scare the general public,” Myers contends. He says there is “racial bias in the Sheriff’s office,” adding, “I’m running to end that.”

The Deputy Sheriff’s Association did not respond to multiple emails and a phone call requesting comment for this article.

The ads also accuse Myers of “pandering to the gun lobby."  Myers was endorsed in his prior campaign by the San Diego County Gun Owners Association due to his concealed carry policy that differed from then-Sheriff’ Gore’s; a court has held that Gore’s policy violated the Constitution in a lawsuit filed by the same gun group. However, Myers’ website also states that he supports regulation of ghost guns to keep the home-made weapons out of the hands of criminals.  The SDGOA did not endorse Myers in the current race.

The mailer also states that Myers violated campaign finance law.  An FPPC warning letter indicates the Myers campaign did fail to timely report complete contributor information on 6% of contributions during one reporting period but that some omissions were “due to an error with the online filing system.”  The Myers’ campaign subsequently provide the information and the commission did not issue any fines. 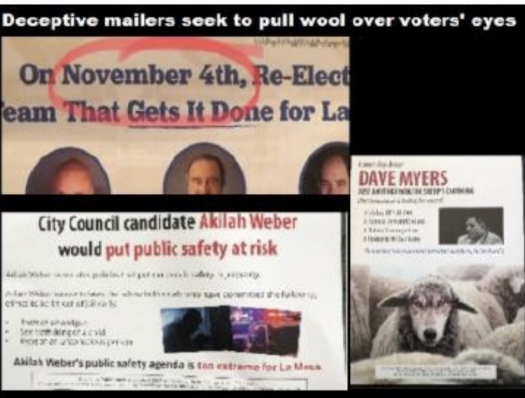 The current batch of deceptive ads bear strong resemblance to ads targeting Myers in his prior race for La Mesa City Council, including false and misleading mailers with the identical image of sheep and Myers’ face. That 2019 ad, which also targeted Akilah Weber as well as Myers, was paid for by the Public Safety Advocates PAC. It accused Myers of being a wolf in sheep clothing and Weber of being a threat to public safety, even though she was endorsed by the La Mesa Police officers’ union.

A 2018 story by Coast News Group indicated Public Safety Advocates got money from the Deputy Sheriff’s Association as well as developers.  For the La Mesa hit piece, the group also took money from Councilman Guy McWhirter.

The same PAC put out a hit piece in 2014 targeting La Mesa City Council candidate Mary England, despite England having endorsement of La Mesa’s police and firefighters unions.  Belying its name, the Public Safety PAC had not taken any money from public safety interest groups, but did take money from developers, a diamond dealer and England’s opponent, Guy McWhirter, who won the race. The group also targeted Alpine School Board candidate Lou Russo.

Myers says the Deputy Sheriff’s Association’s apparent backing of deceptive and arguably racist ads proves the need for reform in the ranks of local law enforcement to restore public trust.

“That’s the reason I’m running,” he concludes, “because there is such a lack of integrity.”