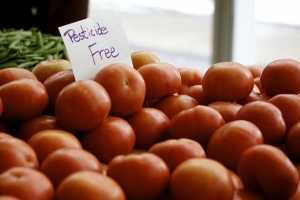 May 4, 2014 (San Diego’s East County) – Dear EarthTalk: What would you consider to be the key areas we need to improve to make our food safer for our health and easier on our environment?

Although we have come a long way in recent years with regard to the safety and sustainability of our food supply, we still have a long way to go. Toxic pesticides are still used on the vast majority of U.S. grown crops, while other hormone-disrupting chemicals are omnipresent in our food packaging. And excessive use of antibiotics in animal agriculture threatens to render many human drugs ineffective. Environmental leaders would like to see the federal government step up and institute regulations banning such substances in our food supply, but for now it’s still up to individual consumers to make the right choices.

Fruits and vegetables grown on conventional (i.e. not organic) farms make up some 96 percent of the produce we eat—and expose us to many pesticides. Two of the most toxic, chlorpyrifoss and DDT, are also quite common: 93 percent of Americans carry trace amounts of the former in their bloodstreams, while 99 percent of us have DDT residue coursing through our veins. These chemicals on our food can be harmful to adults, but health experts are even more concerned about what they are doing to our kids. The non-profit Pesticide Action Network of North America (PANNA) points to recent studies showing that children with high pesticide exposures in the womb are at increased risk of being born with birth defects and are much more likely to encounter developmental delays, ADHD and autism spectrum disorders.

A related issue is the hormone-disrupting bisphenol-A (BPA) in our food supply as a result of its widespread use in the lining of cans and other food and drink containers. “Nearly every person in America has some BPA in his or her body,” reports the Natural Resources Defense Council (NRDC), a leading green group. “And yet, this food-packaging chemical may cause problems in developing fetuses, infants and children by altering behavior and increasing the risk of prostate cancer, as a government report concluded nearly two years ago.” Other studies have shown links between BPA exposure and a variety of human health problems including erectile dysfunction, breast cancer, heart disease and diabetes.

Another big hurdle to a safer, greener food system is our increasing reliance on antibiotics to fight bacterial infections in livestock. The U.S. Food & Drug Administration (FDA) has known since the 1970s that feeding large amounts of antibiotics to healthy livestock breeds antibiotic resistant bacteria, which can in turn render many of the antibiotics used for humans ineffective. In fact, antibiotic resistant infections are already killing 23,000 Americans each year. A 2012 FDA policy change calls on livestock producers to refrain from using antibiotics to boost growth rates for pigs, cows, sheep and chickens, but it remains to be seen if the industry will toe the line or use loopholes to keep up the steady stream of antibiotics.

PANNA is one of many voices demanding an overhaul of how the FDA regulates our food supply. “We all want to believe that government agencies are protecting us and our food supply from chemical contaminants—but they are not,” reports the group. “They do not have the regulatory framework to do so.” The group would like to see the U.S. trade-in its policy that treats chemicals as “innocent until proven guilty” for something akin to Europe’s regulatory system, where a “health-protective precautionary approach” dictates which chemicals are approved for widespread use.

EarthTalk® is written and edited by Roddy Scheer and Doug Moss and is a registered trademark of E - The Environmental Magazine (www.emagazine.com). Send questions to: earthtalk@emagazine.com