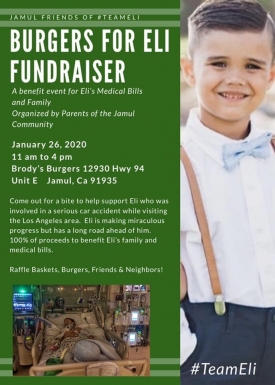 Update January 17:  Eli is now awake and eating on his own, his aunt has informed ECM, but still faces a long recovery.

January 15, 2020 (Jamul) – Brody’s Burgers in Jamul will host a benefit on January 26 rom 11 a.m. to 4 p.m for Eli Oliveros, a 6-year-old Jamul boy who was seriously injured in a car accident. 100 percent of proceeds will be donated to help Eli’s family pay his medical bills.

Eli was in a medically-induced coma and on a respirator after the Dec. 27 accident in Los Angeles, as ECM reported.  As of yesterday, he is now breathing on his own. But he also suffered multiple broken bones as well as damages to his lungs and brain. His vision is crossed, but doctors are hoping the condition will self-correct. 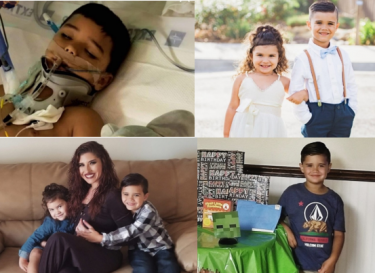 January 9, 2020 (Jamul)—A 6-year-old Jamul boy is in a medically-induced coma due to serious injuries suffered in a car accident on December 27th with his father and two cousins. His aunt, Britney Judd, has organized a GoFundMe page to help raise money to pay for Eli Ontiveros' expensive medical care.  The family hopes to locate and thank bystanders who saved Eli from a burning vehicle.

According to the GoFundMe page, Eli suffered fractures to his clavicle, sternum, and six ribs. He also has damage to his lungs and brain. “Right now the goal is to get him off of ventilation and to get his breathing on his own,” the GoFundMe page states.