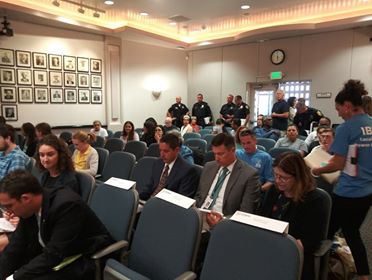 September 11, 2019 (La Mesa) – The City of La Mesa is one step closer to competing with SDG&E on electricity acquisition, after approving the first reading of a resolution authorizing specifics on a joint power agreement, or JPA, with the cities of San Diego, Chula Vista, Encinitas and Imperial Beach at its September 10 meeting. It still requires a second reading in La Mesa and ratification in the other cities. The specifics can be found here. https://www.cityoflamesa.us/AgendaCenter/ViewFile/Item/4095?fileID=8858

Debate centered not around whether or not to authorize the joint powers agreement, or JPA, to form a community choice aggregation, or CCA, in which cities would purchase power from renewable resources and sell directly to residents. Instead, discussion focused on whether or not to make any amendments. Proposed amendments included ensuring the community advisory commission is diverse, additional labor protections, banning nuclear energy, and not allowing credits that could be purchased to off-set use of fossil fuels during times of day when renewable energy is less abundant.

Mayor Mark Arapostathis, Vice Mayor Bill Baber, and Councilwoman Kristine Alessio supported a recommendation from staff backed by groups such as 350.org, an environmental advocacy grass-roots organization, that the language be approved as drafted to meet a “reverse engineered schedule” in which any changes must be ratified by the four other cities before the end of this year in order for service to begin in 2021.

During public comments, Sophie Wolfram, Director of Programs for Climate Action Plan, testified, “We congratulate you and thank you for all the work required to get to this point. This really is a milestone... and we recommend you adopt it without any changes... It's a tight timeline,” she noted, adding, “Action on climate has faced more than enough delay... This JPA agreement includes much of what we have worked for.” Wolfam promised, that “We will continue to advocate once the board is seated.”

Megan Lacy, Community Developer at Sullivan Solar, said that their company “proudly uses union labor,” and urged the Council to “please adopt the JPA agreement without amendments” for a “lower rate, a higher mix of renewable energy.” She stated, “We have the ability to safely revolutionize our grid…If we delay there will be missed opportunity.”  Lacy added, “There is no time to waste. We must move forward with the CCA this year.”

Kyle Rentschler, Conservation Organizer at the Sierra Club, felt that there was still time to improve the proposal, citing, among other things, that “on the environmental side, the current draft leaves the door open for dirty energy (such as nuclear).”

Mika Mitrovsky testified, “When we spoke on this item last month we flagged several concerns with the draft JPA document being circulated by the city of San Diego.” She called the proposal a “weak and deficient JPA document that needs addressing,” and that, “it leaves the door open to fossil fuels (through credits),” and urged Council to strengthen “public outreach” for the community advisory committee. She said that the rush “is not a smart way to do public policy,” and that “there is still time to improve.”

David Harris, part of 350, told the Council, “We are in favor of community choice energy and happy to see La Mesa moving forward here tonight,” but urged  that the Council “not [make] any amendments tonight but allow the newly formed board to deal with the issues that have been raised.”

”Good faith negotiations on the JPA have been going on for months,” pointed out Wendy Minhalich, also part of 350, adding, “In the end, compromise is the key to getting complicated deals done. No one is perfectly satisfied, but the agreement lays the groundwork for future cooperation.” She urged Council to approve the document “as drafted,” concluding, “As Councilwoman Weber said, `Let's summon our thunder!’”

Jean Costa, a resident of La Mesa since 1964 and part of both the Sierra Club and 350, testified, “I urge you to pass this resolution as is, because no agreement of any kind is ever perfect. We're human beings and we have plenty of time once we get a board going to deal with some of the issues that have been brought up this evening.”

Jack Shu likened the situation to rushing a homework assignment that was due the following morning, but did not weigh in as to whether or not he thought changes should or should not be made.

Riley Lewis urged Council to approve the measure as written, saying, “Time is of the essence and there is no time like the present,” adding, “The only easy day was yesterday,” to which Council and the audience laughed.

Andrea Beth Damsky, Vice Chair of La Mesa's Environmental Sustainability Commission testified that these are “disagreements among friends.”  She said that union people care about the environment and environmentalists care about labor, but that ultimately, Council should “approve the recommendations (as written).”

Now that five cities are on board, instead of four or fewer, each City is expected to send only one delegate, instead of two. Should only one delegate be required, La Mesa will send Councilman Baber, with Assistant City Manager Gregory Humora as his alternate. Should two delegates ultimately be required, Councilmembers Baber and Weber will represent La Mesa,  with Humora as alternate.

Under the JPA, La Mesa residents will automatically be opted into the CCA for their electrical power, an action that is estimated to save residents slightly on their energy bills and move toward 100% clean energy sources.  Residents will have the choice to opt out and stay with SDG&E, which will still handle billing and delivery through its power lines and other infrastructure even to CCA customers.

SANTEE OPTS FOR COMMUNITY CHOICE, BUT DELAYS CHOOSING A PARTNER