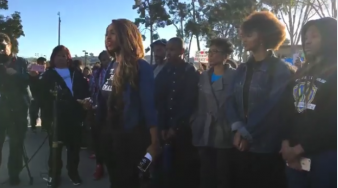 June 15, 2020 (La Mesa) – The San Diego Union-Tribune reported Friday that the City of La Mesa quietly signed an agreement back on Sept 5, 2019 to settle a lawsuit filed by a Helix Charter High School student over a use-of-force incident shown on a video that went viral.

The City agreed to pay $130,000 to Brianna Bell, a 17-year-old black student knocked to the ground when already handcuffed by Scott Wolfing, a white LMPD school resource officer. The incident occurred in January 2018, as ECM reported, and was partially captured in a video that went viral, sparking a protest by students on campus.

The city hired an independent investigator which took over a year to complete at a cost of  $22,000 and found that Wolfing did not violate policy, use excessive force or have racially motivated actions. However the mayor and councilmembers voiced frustration when a summary of the report was presented in January 2019 that due to restrictions under state law protecting confidentiality, they were not allowed to view the full report, nor learn the full circumstances that preceded the video.

Posts on social media by advocates of Bell at the time had indicated she had been asked to leave school after her backpack was searched and pepper spray found, which she had reportedly carried for safety due to riding the trolley to school. When she became argumentative, police were called.

Under the settlement, neither side admitted guilt. Wulfing, who had been placed on leave, returned to the police force, though not as a school resource office. In avoiding a trial, the settlement means that the public will never know the full story of what transpired.

In response to that incident, the City formed a citizens oversight police panel slated to have its first meeting this week, scheduled before the recent fiery protest over the killing of George Floyd by Minneapolis police officers and a recent controversial stop by a La Mesa Police officer of Amaurie Johnson.