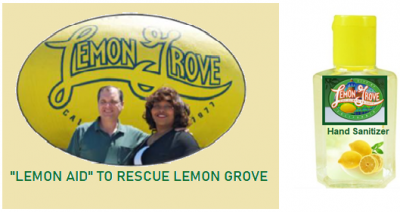 “With shortages of hand sanitizers amid COVID-19 concerns, the first product we’re rolling out is a lemon-scented hand sanitizer manufactured by the City of Lemon Grove,” said Mayor Racquel Vasquez, who added that she drew inspiration from New York State, which recently started producing its own brand of hand sanitizers.

Unlike New York, which is relying on prison labor, Lemon Grove is teaming up with a spirited  local distillery and hiring local residents, creating “good jobs with livable wages” to also put more disposable income into workers’ pockets, the Mayor added, spritizing sanitizer spray into her palms and rubbing them vigorously as the aroma of lemon wafted over the press corps assembled for the announcement.