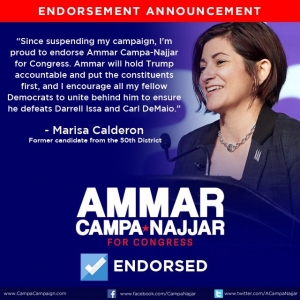 February 5, 2020 (San Diego’s East County) – Marissa Calderon, a Democrat  who entered the 50th Congressional district primary race belatedly after the resignation of Republican Congressman Duncan Hunter in January, has announced she is dropping out of the race to care for two family members with serious health conditions.  Calderon has endorsedAmmar Campa-Najjar, who is also endorsed by the Democratic Party.

Calderon’s name will still appear on ballots which were printed before her withdrawal.