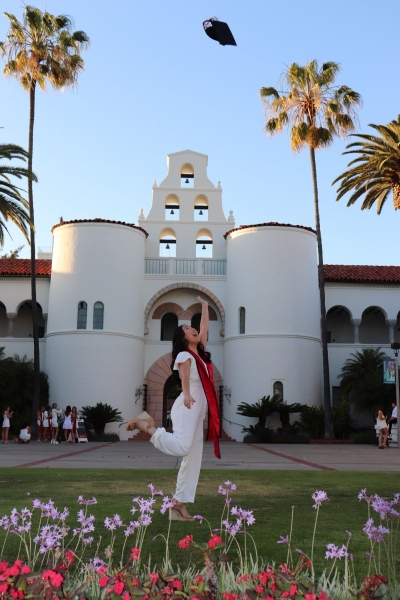 East County News Service
Photo: Kiana Taylor's Facebook, SDSU Class of 2020, tossing her graduation hat in May 2020
September 17, 2020 (San Diego’s East County) – The County Medical Examiner has released the identities of victims who lost their lives in several East County accidents over the past two weeks including two lives lost in a fiery multi-vehicle crash near La Mesa, a pedestrian killed in El Cajon, a missing Lake Morena camper found dead in Hauser Valley, a Borrego pickup truck driver killed in a rollover crash, and a motorcyclist who died at the scene of a crash in rural Alpine.
Kiana Taylor, 22, of Poway died September 11, 2020 after a vehicle fire resulting from a collision on Sept. 9 that occurred at the intersection of 70th Street and El Cajon Boulevard in San Diego, on the border of La Mesa.  A vehicle entered the intersection and struck her vehicle, causing it to collide with other vehicles and catch fire. She was transported to UCSD Medical Center, where she died two days later of burns and abdominal blunt force injuries.
Casey Diane Hargis, 22, of San Diego was a passenger in the same vehicle in the accident above when it was struck, pushed into other vehicles and burst into flames. After 911 was called, she was transported by paramedics to UCSD Medical Center and died the next day of vascular injuries from pelvic fractures.
Dana Lynn D’Angelo, 51, of El Cajon was struck by a westbound vehicle while walking across W. Washington Ave. in El Cajon on Sept. 10, 2020. She had no pulse when first responders arrived and despite life-saving attempts, she was pronounced dead at the scene of multisystem blunt force injuries.
Yoo Myung Ung, 79, of Los Angeles went camping at Lake Morena County Park in San Diego’s East County  A park ranger noticed Ung’s trailer was still in the lot on August 26, when he was scheduled to leave the park.  After contacting the man’s family, who had not heard from him for four days, Sheriff’s search and rescue workers found his body on a remote trail in Hauser Canyon near Dulzura on September 1st. The Medical Examiner determined Ung died of a heart attack. East County Magazine's earlier coverage can be found here.
James Edward Prange, 52, of Borrego Springs, lost control of his truck while driving south on Borrego Springs Rd. north of State Route 78 on September 3. The vehicle rolled over several times, landing on its side. Bystanders righted the pickup truck and tried to help the victim, but he was unresponsive and paramedics pronounced death at the scene of cranial and blunt force injuries. East County Magazine's earlier coverage can be found here.
Luis De La Cruz Villfuentes, 52, of Tierrasanta and a friend were riding motorcycles on Lyons Valley Road in rural Alpine on August 30 when he missed a curve, struck a tree and was ejected. He came to rest about 50 feet down an embankment.  911 was called and his friend began CPR.  Paramedics arrived and confirmed death without medical intervention due to obvious signs of trauma. Cause of death was multiple blunt force injuries. East County Magazine's earlier coverage can be found here.