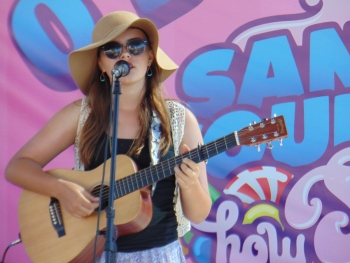 East County News Service
August 25, 2020 (El Cajon, CA) — Amelie Simpson, a junior at Valhalla High School, has been named one of San Diego’s most remarkable teens. The award, presented annually by the San Diego Public Defender’s Office and the San Diego Public Defender Youth Council, honors teen accomplishments in a wide range of categories, including civic involvement, leadership, and the arts.
Nominated by the Mitchell Thorp Foundation, Simpson is one of 25 teens recognized this year for their achievements. Beth Thorp, founder and executive director of the Mitchell Thorp Foundation, recommended Simpson for the award saying, “While Amelie’s musical abilities standout publicly, the majority of her other accomplishments, especially her dedication to community service and academic excellence go unnoticed because of her humility.”
The East County teen is a singer and songwriter, who performs at venues throughout San Diego, including the House of Blues, the San Diego County Fair, Grossmont Center, and the Helix Brewing Company. Ron Troyano, founder of Alchemy San Diego, who manages events for Seaport Village said, ”We feature music from many local performers and one of our favorites is Amelie Simpson, a true talent.”