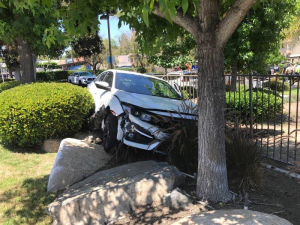 June 19, 2020 (Santee) – A suspect is in custody after reportedly threatening to kill a 77-year-old woman and her family, then forcing the victim out of her car and driving off with her purse and cell phone.  The carjacking occurred shortly before 1 p.m. today in the 9800 block of Mission Gorge Road in Santee.

Sheriff’s deputies and La Mesa Police officers found the suspect, Chris DiSalvo, 30, sitting in the stolen car in the 4600 block of Palm Drive in La Mesa.

“Upon seeing law enforcement DiSalvo took off, but crashed into a tree,” said Sergeant Michael Tingley with the Sheriff’s Department.“He then ran into an apartment complex."