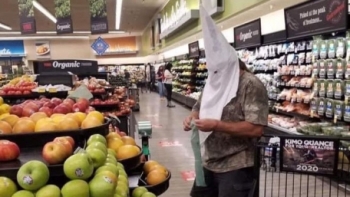 Photo: The Santee Vons shopper wearing a makeshift Ku Klux Klan hood has been identified, the Sheriff’s Department announced Tuesday
“Detectives have identified the man in the images and will continue their follow-up of the incident,” said a news release. “The Sheriff’s Department would like to thank the public for their assistance and cooperation with this incident.”
No further details were available, including the man’s name and how he was identified.
On Tuesday, sheriff’s spokesman Lt. Ricardo Lopez said: “Detectives are still working on their follow-up so we are not going to release any information at this point.“
On Monday, following several days of social media and official outrage, sheriff’s officials announced that they were looking into the matter and “will pursue any appropriate criminal charges.” 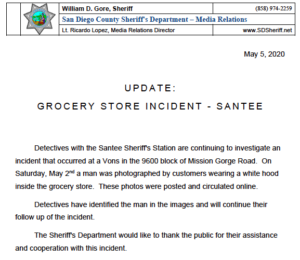 Photo, right: Sheriff's Department news release on hooded man being identified (click here for PDF)
Fallout continued, with congressional candidate Ammar Campa-Najjar and others weighing in.
Campa-Najjar, the Democrat facing former Rep. Darrell Issa in the 50th District race that includes Santee and other parts of East County, said in a tweet: “Is this some sort of dog whistle? Someone wore a KKK hood in #CA50 and Issa has been slow to condemn (actually, he hasn’t at all). I fully defend the 1st Amendment, but that doesn’t allow someone to shout ‘fire’ in theatre or wear a symbol of hate and murder at a local store.'”
(In fact, Issa retweeted a tweet by county Supervisor Dianne Jacob in which she said: “This blatant racism has no place in Santee or any part of San Diego County.”)
San Diego NAACP President Francine Maxwell noted the Santee incident among others and called on authorities to investigate “and provide a full report to the community and a procedure moving forward to eliminate racial discrimination and harassment in the enforcement of social distancing.” 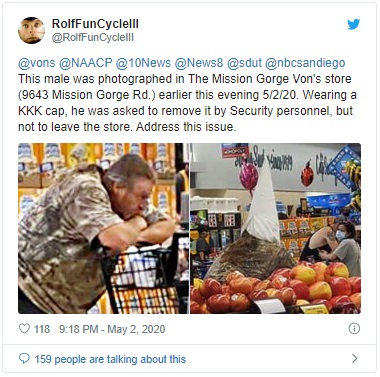 The story reached a national audience Monday when The Washington Post summarized the case under the headline “A man wore a KKK hood at a grocery store after San Diego County required face masks.”
That morning, Santee Mayor John Minto told the New York Daily News that he would “love to know who that person is and hold them accountable.”
Minto saluted shoppers and store employees who confronted the man and forced him to remove the KKK hood or leave.
“I think it’s fantastic that they took action. I think it demonstrates the real character of our city,” he told the tabloid. “Today, with so much going on, you don’t know how people are going to react to confrontation. Sometimes people do nothing out of fear. And this was one of those instances where people set aside their fear and took action.”
On Tuesday, CNN ran its own story.
CNN spoke to customer Alisa Wentzel, who said at first she didn’t believe what she was seeing. 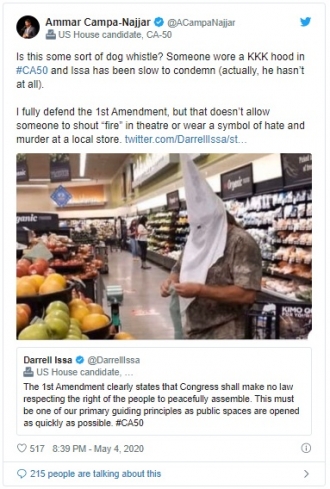 Wentzel said she moved between aisles to sneak photos of him and keep her distance.

“Management should be doing something, but I didn’t see anyone talking to him,” she said. “He was just standing in line.”
CNN added: “By the time she’d finished her shopping at the self-checkout lane some 30 minutes later, the man was in line waiting for a cashier, still wearing his hood, she said.”
Wentzel said: “I just remember feeling so heartbroken, so hopeless and then also just really upset that this would happen in the community that I raise my family in. I was just in utter shock and disbelief. I still feel that way.”
In a press release Tuesday, Campa-Najjar added: “Our community deserves leadership that reflects the best in us and swiftly calls out injustice and old hatreds. That’s why I’m calling on Darrell Issa to break his demeaning silence and condemn what local officials have called racist and law enforcement is investigating as a criminal act.
“We cannot let this man’s bigotry, or Hunter’s racism, be what our great district is remembered for. This election will define who we are as a district.”
----------------------------------
Also found in East County Magazine:
SOCIAL MEDIA ERUPTS OVER PHOTOS OF SHOPPER WEARING KKK HOOD IN SANTEE (By Ken Stone, May 3, 2020)
READER’S EDITORIAL: THE MAN WHO WORE A KKK HOOD TO A SUPERMARKET...IS THIS WHO WE ARE WHEN WE THINK NOBODY IS WATCHING? (By E.A. Barrera, May 5, 2020)