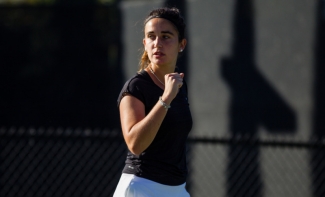 SDSU was able to quickly secure the doubles point with wins in all three matchups. Freshman Nnena Nadozie and junior Magda Aubets were first to finish, dominating with a 6-0 win over Michelle Torres and Nicole Camaratta in the No. 3 seed. Senior duo Jana Buth and Paola Diaz ruled court two with a 6-1 finish over Shelby Groeneveld and Ellie Gamble, while junior Jenny Moinard and sophomore Mia Smith continued the winning trend for the Aztecs by finishing 6-3 over Nikki Newell and Carolina Cueva Bucio.

Singles play was no different for SDSU where Nadozie quickly secured a 6-1, 6-1 victory against Torres on court five, while Moinard took control over Gamble, 6-2, 6-2, in the fourth seed. For a consecutive match, freshman Abbie Mulbarger clinched the win for the Aztecs with her 6-2, 6-1 decision over PLNU’s Camaratta on court six.

The Aztecs continued their winning trend on courts one through three as Buth took down PLNU’s No. 1 player Newell, 6-1, 6-4, while Aubets managed a 7-5, 6-1 victory over Cueva Bucio in the second seed. The match on court three was pushed to a 10-point tiebreak after Diaz and her opponent Groeneveld split the first a second sets, but Diaz finished on top, 7-6 (3), 4-6, 10-5.

The 5-1 Aztecs are set to continue their six-match home stand this weekend where they’ll face BYU and University of San Diego on back-to-back days. SDSU takes on the Cougars Saturday and the Toreros Sunday, with both matches set for noon at the Aztec Tennis Center.