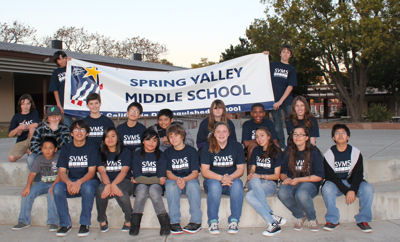 By Sophie Coston
February 10, 2012 (Spring Valley) -- After four months of spending many evenings and weekends preparing and learning about a variety of science subjects, the Spring Valley Middle School Science Olympiad team competed in the San Diego County Regional Science Olympiad. The annual competition took place on Saturday February 4 at Rancho Bernardo High School with 28 schools from all around the county, and 90 total middle school teams. Spring Valley Middle School, which is part of the La Mesa – Spring Valley School District was the only East County middle school that participated in the countywide event.

SVMS had two teams participate with a total of 25 students. This was SVMS's second year competing in five years. The competition consisted of both building and testing events that allowed for participation from students with differing interests and skill levels. 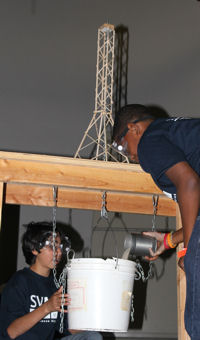 Although SVMS did not place in any of the events, they were extremely proud of the hard work and tremendous effort that was put forth by their students and their volunteer coaches. Participants found this was an excellent way for students to use a hands-on approach to engage in the science curriculum outside of the typical classroom environment.  Many of the students and coaches already have their sights set on competing again next year!
On February 18, the Steele Canyon High School Science Olympiad team will participate at the high school level at Del Norte High School.