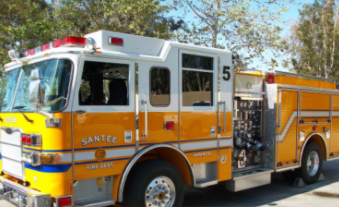 The top rating places Santee amongst the ranks of only 38 fire departments in California and 393 departments nationwide that have earned the distinction. The new rating officially went into effect March 1, 2021.

Home and business owners are encouraged to contact their insurance providers after March 1st to see how the Class 1 rating affects their respective insurance rates. 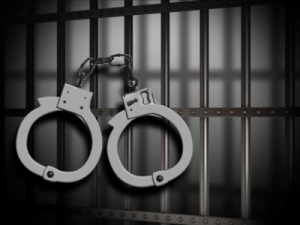 East County News Service
December 5, 2020 (Santee) – A Santee man was arrested Thursday for child abuse and murder of his infant son last April.  Daniel Charles Marshall, 35, was taken into custody by the U.S. Marshals Service Fugitive Task Force in San Diego, says Lt. Thomas Seiver.
The Santee Fire Department responded to a report of the 7-month-old infant in medical distress on April 22 in the 8600 block of Paseo Del Rey in Santee. Deputies responded to assist and the Child Abuse Unit responded. 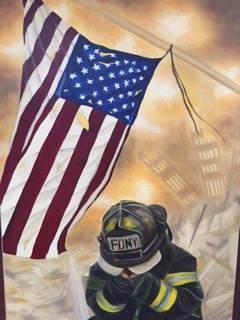 October 16, 2018 (Santee) -- An original art work honoring the sacrifice of first responders on September 11,2001 will make Santee its home for the next three months.

The 3-by-4-foot oil painting portrays a New York firefighter with is head in his hands standing below a tattered American flag with the iconic wreckage of the Twin Towers in the background. 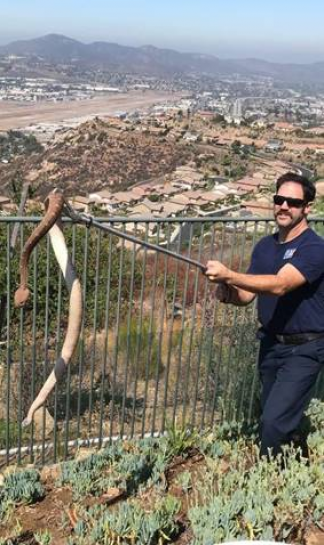 July 29, 2018 (Santee) - The Santee Fire Department posted this photo of a red diamondback on Facebook, with a timely message:  “ Santee Fire Department is an “all hazards” fire department, which means we wrangle snakes from time to time! This little fella is one of the bigger snakes we’ve captured. Don’t put your hands or feet where you can’t see, and always look before stepping over doorsteps, snakes like to crawl along the sides of buildings.” 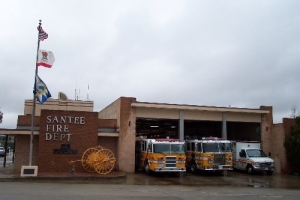 December 12, 2016 (Santee) — Santee Fire Department officials will express their appreciation to the Firehouse Subs Safety Foundation for providing the city with grant funds for new life-saving equipment at static display of the equipment scheduled for 10:30 a.m. Dec. 16. 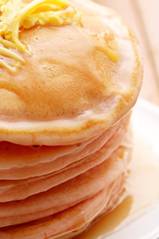 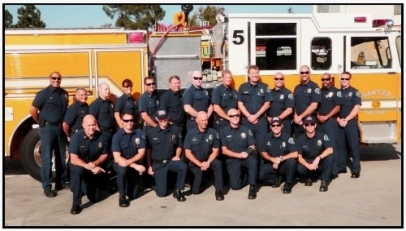 August 18, 2016 (Santee) -- The City of Santee is reintroducing red-colored fire suppression vehicles into its fleet after 50 years of having yellow as the primary color for the department’s fire apparatuses.

January 2, 2015 (El Cajon)-- Heartland Fire Dispatch received reports at 6:21 p.m. on January 1st of a structure fire at 1753 Woodburn Street in El Cajon.  As fire crews arrived on scene they found the attic area of the home in flames. Heartland Fire & Rescue crews from El Cajon, with assistance from the Santee Fire Department, quickly had the fire out in ten minutes.

September 7, 2014 (El Cajon)—Two people have been transported to the burn unit at the University of California San Diego Medical Center due to smoke inhalation and minor burns suffered in a bedroom fire early this morning. 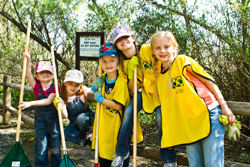 By Troy Hartpence
April 30, 2012 (Santee) -- Swarming like bees all over an area of the San Diego River Trail in Santee, close to 400 local members and friends of The Church of Jesus Christ of Latter-day Saints joined together on Saturday, April 28 to participate in the annual “Mormon Helping Hands” day of service. Volunteers of all ages performed duties such as trail maintenance, fencing installation, concrete breakdown, weed abatement, painting, laying down mulch, litter removal, water primrose and tamarisk removal and overall beautification tasks of the area. 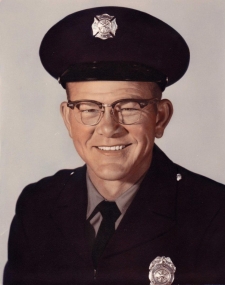 May 4, 2010 (Santee) – For nearly three decades, Johnny L. Terry served with the Santee Fire Department, rising from the ranks of pioneering volunteer firefighters to become Division Chief. Retired since 1986, he passed away on May 2, 2010. A memorial service is scheduled for noon on Saturday, May 8th at Santee Fire Station 4, 8950  Cottonwood Drive. A celebration of his life will follow at a separate location to be announced.

“He was a great, common sense guy and a good friend who would do anything for you,” recalled former Fire Chief and retired City Manager George Tockstein, who worked with Terry for 20 years. “He always cared for the other guy...He had a strong commitment to his family and he loved his kids.”