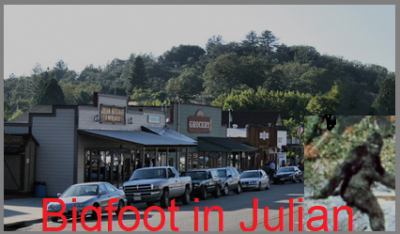 April 1, 2020 (Julian) – Around the world, as cities and towns shut down due to the coronavirus pandemic, there are reports of wild animals roaming the streets – from cougars in Colorado to coyotes in San Francisco.  Early this morning, several reports have come in of a mysterious creature first spotted in Ranchita and later, lumbering down Main Street through downtown Julian.

“It looked just like that statute of a yeti in front of the Ranchita store, only with long, dark hair,” said Ida Witness, a Ranchita resident who says she heard her dogs howling shortly before dawn when she went outside and saw the towering, shadowy figure.