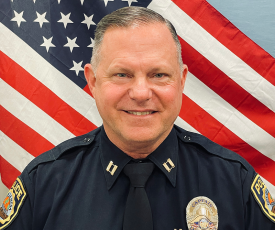 July 10, 2021 (La Mesa) - La Mesa announced on July 1 that Captain Ray Sweeney will serve as the new La Mesa Police Chief, effective immediately. The selection was made by City Manager Greg Humora. Sweeney has served as a Captain in La Mesa Police since 2015 and has previously served in the United States Army and the Army National Guard.

“After a comprehensive and thorough recruitment process, I am confident Ray Sweeney is the leader we need to advance our Police Department and sustain our professionalism and focus on best practices to deliver for our community. The La Mesa Community will benefit from his immediate familiarity with our City and Police Department while also leveraging his strong character and clear vision for effective community policing,” City Manager Humora said in the press release.

This appointment comes almost a year after former La Mesa Police Chief Walt Vasquez announced his retirement would start in August 2020, just months after La Mesa’s controversial stops of Amaurie Johnson and racial justice protests that turned into riots in May 2020.

Vice Mayor Jack Shu, who long pushed for the establishment of La Mesa’s police oversight board, said the city “did due diligence and got a number of applicants” including people of color and at least one woman before City Manager Greg Humora chose Sweeney, who is white.

“He got input from lots of folks and different groups,” Shu said of the city manager. “Both the City Manager and Ray Sweeney know that a lot of changes need to be made – and they are aware that promoting from within may be looked upon by some with curious eyes if not dismay,” Shu notes. “Police reform is hard work. Changing such institutions is very difficult. Having a chief who knows the organization may be a real asset and helpful in making changes.”

La Mesa hired the executive recruiting firm Teri Black & Company (TBC) to conduct the national recruitment process. According to the press release, the search conducted by TBC resulted in the receipt of 25 applications from across the United States including six Hispanic males, five African-American males and one female.

“As Mayor, I am committed to ensuring our residents have a voice on important issues.  I sincerely appreciate the efforts of our Community Police Oversight Board (CPOB), Homeless Task Force, business representatives, and the faith community volunteering their time to assist our City Manager in making this decision.  I have confidence our new Chief understands we must honor the past but also challenge the future by being more inclusive, listening to our residents, and making positive changes to our policing practices,” La Mesa Mayor Mark Arapostathis said in the press release.

“My commitment is to strengthen community trust, provide the best public safety services to all who live, work in, or visit our great City, and provide the most comprehensive training for our employees to accomplish this,” said Chief Sweeney. “Policing is on the forefront of the mind of our community and our City leaders. I, too, wake up every morning thinking about how to best deliver for the residents and businesses of La Mesa.”

sounds nice, I hope it's legit

For those of you unfamiliar with community policing, from my time in college we learned it was often police on scooter or on foot, meeting the people, the regulars, learning people's names and sometimes stories.

There was a problem with theft in Lemon Grove's mom and pop retail store row on Broadway starting across the street east of the trolley, so the Sheriff's Lemon Grove substation gave their cell phone numbers to the shopkeepers in case of emergency or theft, so half the time the cops are waiting right outside the front door and bust the thieves right there. (Idk if they have weapons, i'd be just as worried tackling a thief about my gun getting stolen than needing a gun, maybe they can keep it in the car, idk)

Maybe the holsters can be equipped with a thumbprint scanner; but it's gotta be speedy!!

" 25 applications from across the United States including six Hispanic males, five African-American males and one female."...........and yet they hired an old white guy!!! no racism here......

And THEN it's not racist

P.S. i would have preferred a woman and/or person of color too