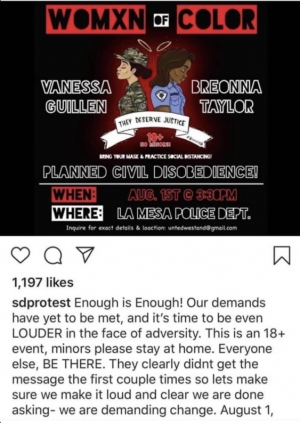 July 24, 2020 (La Mesa) – Another  protest against the La Mesa  Police Department  has been announced  for Saturday, August 1, at 3:30 p.m. outside the La Mesa Police Department. The flyer indicates that "civil disobedience" is planned and indicates this event is for adults only. The action comes amid nationwide protests calling for police accountability and racial justice.

The protest comes two months after a May 30 protest over police and racial justice issues dissolved into a riot that ended with police pelted by rocks and bottles, three buildings burned down and dozens of buildings looted. However several protests that remained peaceful have been held since then including a unity rally and Juneteeth rally.

The earlier protest stemmed from the brutal death of George Floyd, who was killed beneath the knee of a Minnesota police officer now on trial for murder, as well as from concerns over a La Mesa Police officer’s stop of a young Black man, Amaurie Johnson, near a trolley stop in what some have characterized as racial profiling. Johnson was charged with assaulting a police officer, but the charge was dropped after body cam footage failed to support the officer’s description of the stop.  An investigation continues and the officer remain on administrative leave. 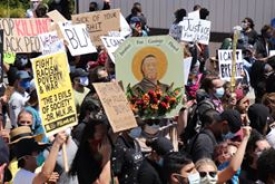 During the May 30 protest, as police were being pelted with rocks and bottles toward the end of a more than two hour barrage, a beanbag projectile fired by a La Mesa Police detective struck Lemon Grove grandmother Leslie Furcron in the forehead. This caused her to be hospitalized in an induced coma, undergo surgery and lose vision in one eye, according to her attorney. She has characterized herself as a peaceful protester, though her attorney has contended she may have been targeted for shouting “murderers” at police.

Yesterday, police released several videos which show Furcron stepping forward and throwing an object, believed to be a beverage can, toward police after several dispersal orders had been given to the crowd and after a fire was reported in the police station parking lot and at city hall. The officer fired from a distance of about 96 feet, according to a police statement. On a live-streamed YouTube video earlier which Furcron removed, she voiced support to burn down the police station, though police were likely unaware of this at the time of the shooting, since body cam indicated one officer mistook her for a man.

The August 1 protest has been promoted on social media in an announcement that appears to be from Womxn of Color has drawings of Breonna Taylor, an African-American woman who was fatally shot by police in Kentucky in her home during a botched drug search, and of Vanessa Guillen, a Hispanic Army sergeant found brutally murdered. “They deserve justice,” the event flyer states, though neither of those deaths have any ties to La Mesa.

The protest flyer does, however, target LMPD with these complaints that “Our demands have yet to be met…so let’s make sure we make it loud and clear we are done asking- -we are demanding change.” 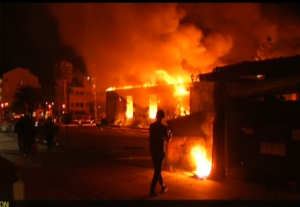 Police have acted on some of those demands, but not all. La Mesa Police dropped use of a controversial chokehold and the city has begun the process of forming a citizens police oversight committee.  Videos of the Amaurie Johnson and Leslie Furcron incidents have been released, along with names of both officers involved. However the officers remain on the force, on leave pending completion of an investigation; protesters have called for the officers to be fired, a process that under the city's contract with the police union requires that certain steps be taken before any officer can be permanently removed.  Some protesters have also called for the city to defund some aspects of the police and divert funds to mental health and social services, steps that the city has not taken, though some other residents have called for more police protection after the destruction that occurred May 30-31 as residents questioned who to blame.

The flyer indicates this protest is for age 18 and up, adding pointedly, “minors please stay home.”  It is unclear why the organizers seek to limit this protest to adults only.

However at a recent protest against police in Portland, Oregon, a female protest stripped naked, wearing only a black face mask and stocking cap, to confront federal officers in riot gear, who were soon replaced by regular police officers, as the Los Angeles Times reported. The anonymous protester drew the nickname “Naked Athena” and performed yoga poses calmly despite pepper balls striking the pavement near her. She later disappeared into the crowd and her identity remains unknown.

Civil disobedience can take many forms, often disruptive but usually nonviolent, as with sit-ins or marches that briefly block traffic.  Around the nation, however, some have dissolved into violence, notably in Minnesota, where a police station was burned down by a suspect later identified as a white man. In Seattle, protesters temporarily took over a section of downtown. In Portland, numerous buildings were hit with graffiti or vandalized.

La Mesa residents have formed a civil defense group that has drawn some both criticism and praise, criticism over concerns that members could theoretically engage in racial profiling or inflict physical harm, but praise for their stated intent of protecting local businesses. During the May 30-31 riot, an impromptu group of residents and business owners carrying baseball bats and metal pipes reportedly chased off some vandals and looters along La Mesa Blvd., then stood guard outside businesses to prevent further damage, also putting out spot fires started in trash cans, witnesses and participants told ECM.

Amid a pandemic, protests have drawn concerns among some residents due to large crowds. At recent rallies and protests, most protesters have complied with health orders to wear masks. In San Diego County, contact tracers have asked people testing positive if they attended any protests. So far, only a handful did so, and no outbreaks (meaning three or more cases) have been tied to any protest in San Diego County.  Constitutional experts indicate it would be unconstitutional to ban protests, though Governor Gavin Newsom did recently prohibit indoor protests to limit spread of COVID-19, as many other indoor activities have similarly been restricted.

At the request of a reader, below are city of La Mesa contacts for residents or business owners who wish to voice concerns or views.