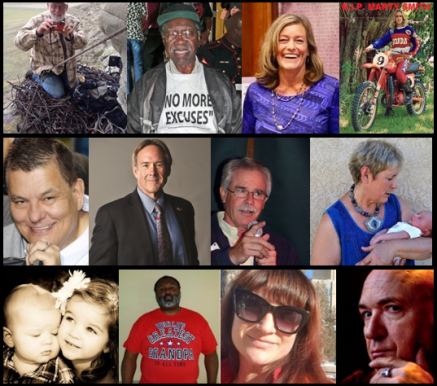 December 30, 2020 (San Diego’s East County) -- They include the famous and infamous-- community and business leaders, a sports star, a youth sports coach, a wildlife expert, a hiking leader, foster parent advocate, loving parents and children, a civil rights leader and a notorious racist who once ran for Congress. They died of causes ranging from COVID-19 to other illnesses, accidents and  murder.  These are the people with strong ties in San Diego’s inland region, who passed on in 2020.

JOHN DAVID BITTNER, WILDLIFE RESEARCHER:  The Julian resident, 75, was best known for the Hawk Watch programs he led for decades at the Wildlife Research Institute in Ramona that he founded, and later at the Begent Ranch. A recognized expert on eagles, he at times drew controversy for  financial ties to energy companies funding research.

His legacy lives on at the Ramona Grasslands, where he and his wife donated 3,000 acres as a wildlife preserve home to many raptors. Bittner died doing what he loved in January, when he suffered a 50-foot-fall while rappelling down a cliff to replace batteries and memory cards in a camera near a Golden Eagle nest in the San Pasqual Valley.

CARROLL WAYMON, PhD, CIVIL RIGHTS LEADER: San Diego’s most prominent civil rights leader, passed away in January at age 94.  As executive director of San Diego’s first human rights agency, the Citizens Interracial Committee, he was a tireless fighter for justice who broke down many barriers for people of color. Waymon was the grandson of a slave and son of a Methodist minister. While working on the Los Angeles Human Relations Agency in 1964, he was asked by San Diego's City Council  to come to San Diego and help address racial issues. He moved here and led the Citizens Interracial Committee, devoting his life to attaining equal rights for all.

A teacher and author of 15 books, he led a series of historic City Hall meetings and grass-roots forums around San Diego four decades ago, after race riots across the nation.  He played a key role in a lawsuit that forced desegregation of San Diego City Schools and founded the Africana Studies department at San Diego State University. He was honored by KPBS TV as a Local Hero in 2013, received the Jackie Robinson YMCA Dr. Martin Luther King., Jr. Human Dignity Award and was slated to be Grand Marshal in the 2020 Martin Luther King Jr. Day Parade in San Diego, but died days before the event. The ACLU, upon his death, posted “Rest in power.”

RHONDA BURT, HIKING LEADER: Rhonda Burt, 57, died doing what she loved most – hiking.  On Saturday, Feb. 15, the hiking leader was on the trail with the Jacumba Hikers group in rugged terrain in the Anza-Borrego desert when she suffered a fatal heart attack and collapsed.. 911 was called, A Sheriff’s helicopter and ambulance responded, but efforts to resuscitate her failed.

Greg Curran, administrator of the Jacumba Hikers group, praised Burt as a “wonderful woman and hike leader” who was “passionate about many things: hiking, water skiing and her faith! She was kind and loving and always ready with a hug…Rhonda is now Hiking New Trails and soaring on to new adventures.”

MARTY SMITH, MOTOCROSS CHAMPION:  Motocross Hall of Fame champion and Alpine resident Marty Smith, 63, died in April along with his wife, Nancy in a dune buggy accident at the Imperial Sand Dunes in Glamis, California.

Smith turned pro at age 17 and went on to win three AMA National Motocross Championship races as well as the U.S. grand Prix of Motocross. He placed fourth in the 15cc World Championship in 1976. He retired from motocross in 1981 three years after breaking a hip, but later teamed up to win the Baja 1000 desert race in1991 and continued to co ach motocross.  In 2000, he was inducted in the AMA Motorcycle Hall of Fame.

BUDDY RABAYA, SANTEE COMMUNITY LEADER:  Santee community leader Buddy Rubaya, a strong advocate for local mobilehome owners, passed away on April 28, after suffering a stroke on March 25.  As president of the Santee Mobilehome Owners Action Committee, he lobbied for residents rights including rent control. He also served as regional manager of the Golden State Manufactured Home Owners League’s political action committee. He married John Hossick in 2015; the couple organized many programs benefiting young people, families and seniors throughout the Santee mobile home community. In 2018, Rabaya was named the Santee Chamber of Commerce’s “Citizen of the Year.”

L. Samson Osburn, another community activist, said of Rabaya, "Buddy helped bring people I to volunteerism. His magnetic personality attracted those who helped others. Buddy's charm, was his greatest strength.”

MTS Chief Executive Officer Paul Jablonski passed away suddenly on May 10 at age 67. His career in transit spanned more than 40 years, including the last 16 years at MTS.  Before joining MTS in 2004,  Jablonski served as CEO of the Southwest Ohio Regional Transit Authority, General Manager of the Merrimack Valley Regional Transit Authority in Massachusetts, and General Manager of the Saudi Arabian Public Transport Co.

MTS Board Chair Nathan Fletcher said of Jablonski. “He was a good man who not only ran a great agency but was a respected national transit industry leader.” He is survived by his wife, four children and grandchildren.

DON PARENT,  SDG&E SPOKESMAN:  Donald “Don” Parent, Public Affairs Manager for SDG&E for 45 years and an active participant in many local business and community organizations, died May 25 of cancer. He passed away at his home, surrounded by his two sons, La Mesa Councilman Colin Parent and Evan Parent,  and his longtime fiancée, Rhonda James.

Debra Emerson, Chief Executive Officer of St. Madeleine Sophie’s Center, stated, “Some people come into our lives and leave footprints on our hearts and we are never, ever the same without them…He was a wonderful person and friend.”

DEBBIE STOLZ, FOSTER PARENT CHAMPION: President of the San Diego County Foster Parent Association in El Cajon, Debbie Stolz, 65, was murdered by her daughter’s estranged partner, along with her daughter, in July. Her death sent shockwaves through the community. Stolz had also worked for over 20 years as a trainer for parents at Grossmont College’s Foster, Adoptive & Kinship Care education program.

Barbara Wojtach, program manager, described Stolz as the “Mother Teresa of foster care.” Sally Cox, CEO of the Foundation for Grossmont and Cuyamaca Colleges, where Stolz was a long-time employee, said, “Deb played an integral role in the program through her training and support to countless resource parents for foster youth in San Diego County.”

Stolz was the mother of eight children, including four who were adopted.  A week before her death, she told CBS-8, “It is so very rewarding to help a child feel safe – to have some place in the world where they feel safe and wanted. I love what I do.”

BAILEY AND LANDON SPARKS, ACCIDENT VICTIMS: Bailey Sparks, 12, and his brother, Landon, 10, from Campo died in a rollover accident July 12 in New Mexico on the way home from a family visit to friends in Texas. Five other family members suffered injuries including their mother, Crystal, who was seven months pregnant, and their father, Brad, who works for Symons Fire Protection in Poway. Suspended upside down, Brad used Apple watch voice commands to call 911.

A GoFundMe site raised over a quarter of a million dollars to help the family in need. Fortunately, despite a punctured lung, broken bones and other injuries, Crystal delivered a healthy baby boy in October, and all other injured family members survived.

Jamul resident Gregory Denny, who worked at Taylor Guitars and was a former Little League coach, died July 24 in a hospital of COVID-19. His wife, Kim Kallege Denny, announced his passing on Facebook, calling him her soulmate and best friend, adding, “He is now my guardian angel.”

A father and grandfather, Denny studied at the American Military University and worked at Realty Executives Dillon before joining Taylor Guitars.  A highlight of his coaching career came in August of 2012 in Ontario,,Lemon Grove Little League's Senior League team won the Western Region Championship and their way to becoming the United States Champions in Bangor, Maine during the Senior League World Series.

California District Little League 66 posted this remembrance of his volunteer service to youth baseball in East County:  “Greg faithfully served as a Manager and Coach at Spring Valley Little League for years. Additionally he served wherever he was needed from Spring Valley, to Twin Hills (where he once even spent the night protecting the lights that had been rented for the Little League Urban Initiative Jamboree) back to Spring Valley… Greg was a gentle man who loved life and leaves a tremendous legacy.”

NICKI BUQUET, MOTHER AND ACCIDENT VICTIM:  Nicole “Nicki” Erin Buquet, 37, of Alpine was killed on Oct. 21 in a crash in La Mesa on state Route 125. Buquet was a passenger in a truck that slammed into the back end of a flatbed tow rig parked on the shoulder just south of Interstate 8.  The driver, Erik Anderson, 28, was booked into San Diego County Jail and charged with driving under the influence.

Buquet is survived by her husband, Brian, and her two sons, Breydan and Kellen .  A GoFundMe page was set up to help her family after the tragedy.  The Alpine Foreign Legion held a memorial to assist her family.

TOM METZGER, INFAMOUS KKK LEADER: One of the nation’s most notorious white supremacists and anti-Semites, Tom Metzger died in November in Hemet at age 82. The former Fallbrook TV repairman and ex-Army private gained notoriety as a Grand Dragon of the Ku Klux Klan who won a Congressional primary race in 1980, later losing the general election overwhelmingly to Clair Burgener.

In 1990, a jury ordered Metzger to pay $5 million in punitive damages after skinheads he incited pleaded guilty to a racially motivated murder. White Aryan Resistance (WAR), a hate group headed by Metzger, also had to pay damages. He later moved to Indiana and ran unsuccessfully for Congress there. He spent brief stints in jail for attending a cross burning and illegally entering Canada to promote racial hatred.

Nick Martin, editor of The Informant, which covers extremism in America, tweeted: “If David Duke is America’s best-known white supremacist in the past 40 or so years, then Tom Metzger was arguably No. 2. His influence on organized racism in the US was large, and he even had sway with a number of young neo-Nazis in recent years.”

San Diego-based journalist Brooke Binkowski, who calls out racism via her truthorfiction.com fact-checking site, said Metzger’s “influence was wide and long lived. Now that he’s dead,” she concluded, “I hope we can uproot his legacy, burn it to the ground, and salt the earth.”