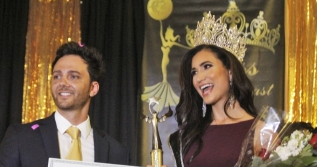 One plaintiff, attorney Lina Charry, has refused to settle

Photo: Ben Kalasho and Zhala Tawfiq, dethroned pageant queen who accused Kalasho of posting faked nude photos of her online in retaliation for a business dispute

The suit was filed by former Miss Middle East Beauty Pageant contestants Zhala Tawfiq and Paris Kargar as well as by Three Brothers Taco Shop against the Kalashos, the pageant, and the former San Diego East County Chaldean American Chamber of Commerce that the Kalashos founded.  The settlement money is to be divided equally among the three plaintiffs, according to the judgment.

Pageant winner Zhala Tawfiq, who was stripped of her crown, accused the Kalashos of running a fraudulent pageant and of retaliating when she refused to share her social media passwords by posting fake nude images with her face on social  media, allegations that Kalasho initially denied. 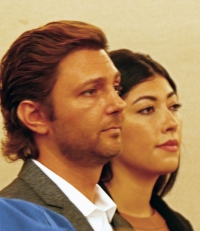 Kargar accused Kalasho of offering to award her the crown if she would have sex with him, and of making comments about her breasts during a pageant rehearsal.  The taco shop claimed that after its owner refused to post Kalasho campaign signs, Kalasho posted a fake poll with defamatory comments under numerous phony identities online.

A judge deemed evidence of the faked identities, falsified nude photos and other fraudulent actions by the Kalasho to be true and admissible at trial, shortly before Kalasho announced last year that he had settled the case and was resigning his seat on the El Cajon City Council.

Ironically, Kalasho had touted the pageant as promoting “equality and women’s rights.”

Plaintiff Lina Charry, an attorney, has refused to settle and her case continues in San Diego  Superior Court.  After Charry won a previous fraud case against Kalasho involving a car was that he owns. In her suit, she alleges that he retaliated by posting defamatory comments on social media, including accusing her of having sex in public.

An East County Magazine investigation in 2017 led to the state stripping the Kalasho’s pageant of its nonprofit status. In 2018, ECM revealed that Kalasho failed to disclose when running for Council that he had pled guilty to criminal workman’s compensation fraud in 2015 and was still on probation.

Kalasho has a long string of legal disputes.  He settled a federal lawsuit filed by activist Mark Lane over Kalasho’s allegedly blocking lane from commenting on Kalasho’s social media – an action that is illegal for a public official on any site on which public business is discussed.  In Nov. 2018, Kalasho announced he had shut down his social media accounts.

The state of California in Feb. 2018 closed a complaint filed by Kalasho alleging discrimination by the city and two of its elected officials against him.

Kalasho also lost a trademark infringement lawsuit and was ordered by the federal government to cease using the name of the San Diego East County Chaldean American Chamber of Commerce. 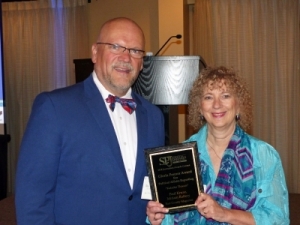 Kalasho engaged in threats against multiple media outlets that reported on his legal controversies, including ECM, and asked not to be contacted again for comments on any articles. ECM reporter Paul Kruze filed a police report accusing Kalasho of threatening him with an attack dog; a similar claim was made by a process server.

Kruze and ECM editor Miriam Raftery won the Gloria Penner award for political reporting from the Society of Professional Journalists for their coverage of Kalasho. (Photo, right.)

Kalasho gets slapped: Countersuit against accusers thrown out by San Diego judge (Dec. 27, 2017)

Jessica Kalasho brings own attorney to hearing in fraud and harassment case (Dec. 13, 2018)