June 14, 2010 (Lakeside) –It was a scene worthy of Elmer Fudd hunting down "wascally wabbits" -- only this time, the hunters were the rascals.

San Diego Sheriff’s ASTREA 3 helicopter was struck by a laser around 10:03 p.m. last night while flying over Lakeside.  The chopper crew located two boys, ages 15 and 12,  near Idyl Drive and Lakeview Grenada Drive and notified Sheriff's deputies.  Under questioning, the youths admitted that they had targeted the helicopter at least twenty times while hunting rabbits with bows and arrows. 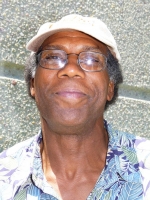 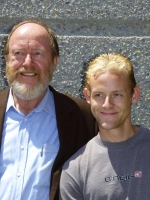 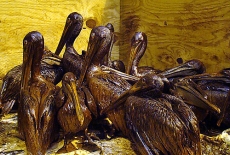 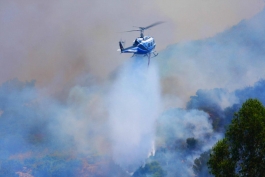 May 29, 2010 (Lakeside) 4:30 p.m. – A 30-acre fire centered at Slaughterhouse Canyon Road just north of Lakeside has been 100% contained at 30 acres. The fire was caused by pieces of a malfunctioning catalytic converter expelled from a vehicle, according to Cal Fire spokesperson Roxanne Provaznik. 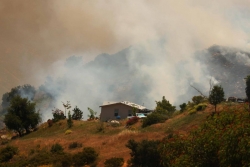 ‘Now is the time of year to keep your vehicles properly maintained, so that fires like this don’t happen,” say’s Fire Investigator Captain Preston Fouts. Also to help prevent fires now that it’s camping season, R.V. owners are asked to check safety chains on the tow hitch and make sure they are tight and not sagging onto the pavement, causing sparks. 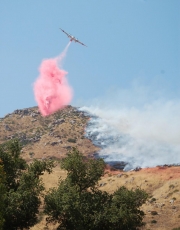 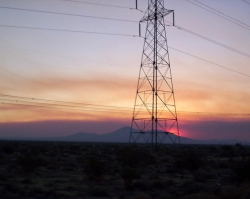 “Many may think this is a David vs. Goliath fight, but remember, David won the fight. We can, too,” said Sharmin Self, East County Community Action Coalition, an organization representing 79,000 people opposed to the Powerlink project. Self urged community members to attend the meeting, adding, “Numbers do count.”

May 5, 2010 (Lakeside) - Hundreds of runners and walkers will gather this Saturday in Lakeside to celebrate the 3rd Annual Run for the San Diego River 5K Trail Run and Walk. The event starts at 8 a.m. with registration at 6:30 a.m and celebrates local efforts to preserve and restore the biological integrity and beauty of the San Diego River in Lakeside. 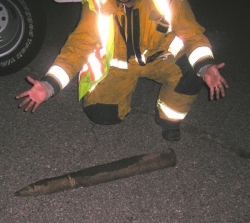 April 25, 2010 (Lakeside) – An 11-year-old boy digging in the backyard of his home on Hillvale Lane in Lakeside Saturday evening unearthed a military shell measuring two and a half feet long and possibly live. Lakeside firefighters responded to the scene and evacuated the boy’s family and a neighboring family.

April 6, 2010 (Lakeside) – Yesterday morning, Lakeside Sheriff’s deputies responded to a domestic violence complaint in the 10000 block of Avenida Real in Lakeside, where a man had assaulted a woman while brandishing a handgun. The suspect threatened suicide and left in his car before deputies arrived. Deputies notified surrounding law enforcement agencies due to the suspect being armed and making threats of suicide. 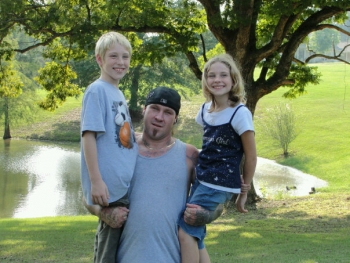 April 1, 2010 (Lakeside) – El Cajon resident Chris Ethan Allen Krum, 34, father of eight children, died from injuries sustained when he lost control of the 1994 Toyota Camry he was driving on Barona Road in Lakeside last night. The vehicle struck a tree and Krum was partially ejected from the vehicle. Despite aggressive resuscitative efforts, he died at the scene. 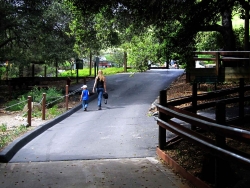 By Dennis and Trever Richardson

March 29, 2010 (San Diego’s East County) -- This secluded park has a family-friendly environment with an educational orientation directed at teaching school children about local wildlife. The park prides itself on education, utilizing its proximity to the outdoors to teach children. Inside the visitor’s center, the park offers views of all types of snakes in enclosures and local plants categorized on the walls.

Stelzer Park recently won the ‘Parents Pick Stelzer Park as County's Best’ award for its great efforts to provide activities and education to children. It is also clean and orderly, with friendly staff who will answer any of your questions with facts and personal stories related to the subject. It is no wonder the park is so popular! 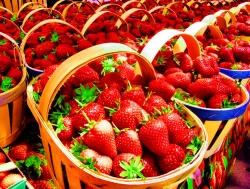 February 28, 2010 (Lakeside) – What could be sweeter than plump, ripe, just-picked strawberries?

February 20, 2010 (Lakeside) – Sean Scenna, 22, has been arrested and charged with assault with a deadly weapon. Scenna is accused of stabbing a juvenile at Lindo Lake County Park in Lakeside on February 14th. 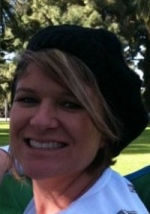 February 17, 2010 (Lakeside) – Amy Beringhaus, 35, of Lakeside was struck by a car and killed yesterday morning on Los Coches Road in El Cajon while jogging with her husband, Shaun, and their dog.  According to authorities, she stepped off the sidewalk into an unmarked crossing area in the northbound land in front of an oncoming car. 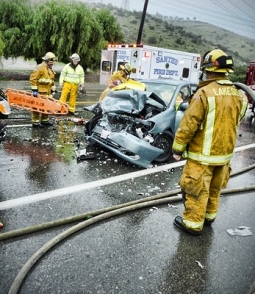 February 6, 2010 (Lakeside) 9:25 a.m. -- Center lanes remain blocked on I-8 westbound at Lake Jennings Road in Lakeside due to a vehicle accident.  Emergency workers have now freed all people trapped in a vehicle and transported three patients to a hospital, according to Heartland Fire dispatch.

Incident Page Network reports that one of those trapped was a baby.

February 5, 2010 (Lakeside) -- The San Diego County Health and Human Services Agency (HHSA) reports that six students at Xara Garden School, a K-2 charter school sponsored by the Lakeside Union School District, have been diagnosed with chickenpox (varicella). None of the six students were vaccinated against chickenpox. 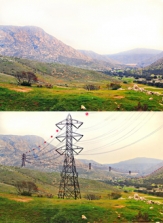 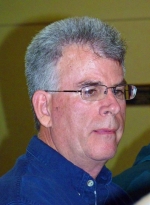 w can you sit there and say it’s safe to be there when that canyon has burned every year—and you’re going to put those towers up, leave us with no power, and we only have one way in and one way out?” -- Myles Thurman, Lakeside

SDG&E plans to hold a follow-up meeting within 30 days.

February 2, 2010 (Lakeside)  SDG&E will host a community meeting with the Lakeside Community Council  tonight at 6 pm. to discuss impacts of Sunrise Powerlink on Lakeside.   Members of the East County Community Action Coalition will also be on hand to provide information on citizens' efforts to halt the controversial high-voltage line. The meeting, whichi is open to the publicf, will be held at the VFW hall at 12650 Lindo Lane.

FIRE BOARD AXES ITS CHIEF 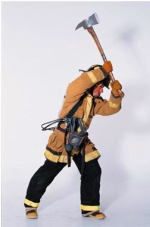 January 16, 2010 (Lakeside) -- The Lakeside Fire Board fired our Chief for doing his job far above the expectations. The rushed lynching of Chief Mark Baker was not announced or publicized to the public by the Fire Board.

This firing was done with the hearing room filled with his supporters who all voiced their heart-filled opinions to keep him; standing room only. The board went against the public outcry to keep Chief Baker. 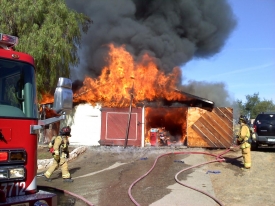 December 14, 2009 (San Diego’s East County) – Residential fires have caused major damage to homes in Descanso, Lakeside, Valley Center and La Mesa this month. The latest blaze occurred this morning at 4:17 a.m. in a condominium complex at 9320 Earl Street #25 in La Mesa, where fire crews arrived in less than five minutes and ran hose lines inside through thick, dark smoke down to the floor. Firefighters used a thermal imaging camera to locate the fire in the kitchen. 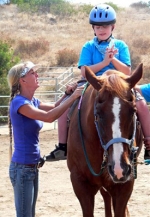 The Magic Horse Therapeutic Riding Center hosts an art fair and live auction on Sunday, December 13th from 12:00 noon to 4:00 p.m. at the Lakeside VFW Hall, 12650 Lindo Lane, Lakeside 92040. Admission and meal costs $25, or reserve a table for six including wine for $150. The event includes a live auction, opportunity drawing, creative activities for children, and T-shirt. Auction and drawin include items donated by local businesses and art by local artists, and artwork created by the horses!

December 4, 2009 (Lakeside) – Jacob Otto Hume, 22, has been arrested and will be booked on two counts of attempted murder, San Diego County Sheriff Department reports. Hume will be charged in the stabbing yesterday of David H. F Fleming, Jr., 29, and another young adult male victim. 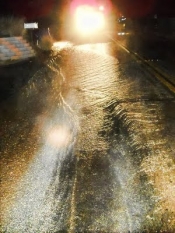 November 16, 2009 (San Diego’s East County) – A series of water main breaks in East County over the weekend have led some area residents to ask what’s caused so many infrastructure failures.

On Friday, November 13th, a water main break at the corner of La Mesa Blvd. and 4th Street sent large amounts of water flowing down La Mesa Blvd. and Allison Ave., causing damage to at least two businesses including the new Bella Mesa Art Gallery. Heartland Fire dispatched a response at 11:29 a.m. Fire crews closed roads and evacuated some businesses and restaurants. But damage could have been worse. 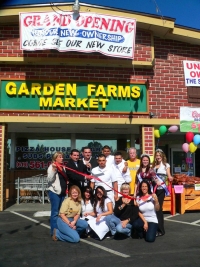 November 15, 2009 (Lakeside) - Community leaders turned out for a grand opening at Garden Fresh Market in Lakeside last weekend, where children frolicked down a giant inflatable slide as parents shopped and savored free barbecued hotdogs and tacos.

“We have more products now,” said owner Noko Kako, an Iraqi Chaldean immigrant who also owns markets in Chula Vista and San Diego. “We have a pizza restaurant—and we do delivery.” The in-store deli counter also serves up sub sandwiches, rotisserie chicken, calzones, fish and chips, shrimp baskets and more. 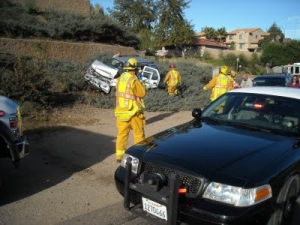 November 4, 2009 (Lakeside) --The Lakeside Fire Protection District received a call of a multi-patient vehicle accident at the intersection of State Highway 67 and Gold Bar Way. This accident was a high velocity head-on collision between two SUV- type vehicles. One vehicle was occupied by a mother, small child, and an infant.

July 2, 2009 (Lakeside) –  A child whose head became trapped in a storm drain has been freed following a dramatic rescue.  The seven-year-old boy tried to retrieve a toy that had fallen into a storm drain near 10252 Big Cone Court, when his head got stuck.

Editor’s note: We’re so inspired by this reader’s “unrattled” attitude over a common backcountry fear that we'd like to make “Tales from East County Readers” a regular feature. Do you have a memorable East County experience to share? If so, please send your essay to editor@eastcountymagazine.org.